Telesdon (テレスドン Teresudon) is a prehistoric, worm-like monster that was controlled by Underground People to attack the surface.

Much like his original appearance, Telesdon was a natural monster that was put under the control of The Sun People to do their bidding. Once Telesdon's movements were headed towards Los Angeles, WINR quickly went to the scene, but as soon as the sun rose, Telesdon fled underground to avoid being blinded by the sun's light. Soon, a game of "cat and mouse" is set up to lure Telesdon to the surface to be blinded by natural lights, but the trick doesn't work as Telesdon was not weak against other forms of light. After a scuffle with the Underground People, Kenichi Kai turned into Ultraman Powered and went to the surface to fight Telesdon. As Powered and Telesdon were fighting, WINR attempted to blind the creature with magnesium flares. After the flares were fired in Telesdon's face, Powered used the Mega Specium Ray to destroy him. The Dark Past

Shortly after landing on the planet Boris, the ZAP SPACY surveyed the area, searching for any sign of life. Not long after, Telesdon emerged from the ground. Also appearing was a stray Sadola and shortly after the two monsters battled to a standstill. Their fight however, attracted the attention of a Red King, who interfered in the battle and easily beat down both Telesdon and Sadola, managing to choke Sadola to death. When Red King was distracted by the ZAP SPACY's appearance, Telesdon recovered and blindsided Red King, continuing their battle, but the ZAP SPACY chose not to watch this time in fear of another monster attacking them. The Lawless Monster Planet

During Golza's attack on the ZAP SPACY, Telesdon returned having survived the fight with Red King, and the monster closed in on the ZAP SPACY dangerously. Luckily, Rei arrived on the scene and sent Gomora and Litra to deal with both monsters. As Litra distracted Golza, Gomora battled with Telesdon in a beam battle with Telesdon's flames and Gomora's Super Oscillatory Wave. Ultimately, Telesdon was overpowered and killed by Gomora's ray. The Fifth Crewman

Later on, Telesdon as well as Red King and Neronga are all revived by the bizarre monster, Bullton to do battle against Rei and the ZAP SPACY. Telesdon teams up with Neronga to double team Gomora, but despite the odds, Gomora outsmarts Telesdon into killing Neronga with his own flames, as well as weakening Bullton's dimensional powers before killing Telesdon again with the Super Oscillatory Wave by sticking it into Telesdon's body and destroying Telesdon's insides in Gomora's usual manner. The Stone Which Calls Monsters

In this series, Telesdon belonged to an Alien Zetton and was sent to battle Alien Hook's Re-Dorako. The two kaiju battled back and forth, neither gaining the upper hand on each other but right as Dorako was gaining the upper hand, a blast of energy from a King Joe Black obliterated both him and Telesdon. The New Horizon of War

Telesdon was one of monsters who were revived by Ultraman Belial as part of his 100 Monster Army. He was first seen as a spirit in 2 shots of the Monster Graveyard. The first one was with King Joe Black, Red King, Doragory, Alien Babarue, and an unknown kaiju while the second one was being emanated by the Plamsa Spark along with Sadola, King Guesra, Zetton, Jasyuline, and Angross. Telesdon then teamed up with Zoa Muruchi, Alien Temperor, Super Alien Hipporito, and Arstron to take on Gomora. When Gomora became beserk, Telesdon was called back along with the remaining monsters to watch Gomora fight the Ultras and was later called back out to fight Ultraman Zero. He was the first monster to be killed by Ultraman Zero's Wide Zero Shot in the final battle followed by Alien Temperor, Vakishim, and Gudon. Mega Monster Battle: Ultra Galaxy Legends The Movie

Telesdon, Bemular, Gudon, and Sadola were revived from the Monster Graveyard by Gurashi to fight Ultraman Zero. He fired his flames alongside Bemular's after Gudon and Sadola were killed but he was killed again with Bemular by Zero's Miracle Zero Slugger. Ultra Zero Fight

Telesdon appeared in the second movie special. He was the ninth monster to be UltraLived by the Livepad and the second monster to be UltraLived by Chigusa Kuno. He went up against Snowgon first and won thanks to his flames. After being ambushed by Dorako, Telesdon knocked him down with his tail and then they fight. Both put up a terrific fight against each other, but before Telesdon could finish off Dorako, the latter vanished. Telesdon then went up against Alien Baltan. Baltan confused Telesdon with his illusions and teleportation, held Telesdon with his telekinesis and finished him off by firing his missiles until Telesdon was called out. Ultraman Ginga Theater Special: Ultra Monster ☆ Hero Battle Royale!

Telesdon was among the Spark Dolls that slumbered beneath the Earth and ocean and awakened after a solar flare bathed the Earth.

15 years later, it created a series of earthquakes in Area T-7B, with the biggest one in Kamikura Street, prompting Xio to investigate the case. When they did, they encountered the Underground Woman who summoned Telesdon with her screech and sent him to the surface to rampage and soon encountered the Land Musketty. He tried to burn it alive but after the vehicle released some flares, Telesdon released its grip on it and retreated back underground.

The next night, the Underground Woman summoned Telesdon to rampage again. After protecting Asuna Yamase, Daichi Ozora transformed into Ultraman X to fight Telesdon. X had the upper hand at first, but then Telesdon used his environment and his new moves to get the edge on the Ultra until Hayato and Wataru used the new Ultlaser to save him. Rui and Mamoru then sent Cyber Eleking's data to X allowing him to gain the Eleking Armor. After countering Telesdon's drill attack with the whips produced from the armor, X finished off Telesdon with the Eleking Electric Shockwave and it turned into a Spark Doll as a result. The Spark Doll was salvaged by the Underground Woman, but she left it to Xio after vanishing due to being shot multiple times. A Song That Calls the Night

A cybernetic version of Telesdon, Cyber Telesdon (サイバーテレスドン Saibā Teresudon) was created based on the Spark Doll, now contained in a Cyber Card. In episode 4, Hayata and Wataru used the Cyber Telesdon card sent by Rui and Mamoru to equip the Space Musketty with Telesdon's lava breath to save X from Bemstar. All for One

In the final episode of Ultraman X, after Greeza destroyed the Xio base, Telesdon's Spark Doll was absorbed by Greeza. After speaking out to Gomora and striking Greeza right in the center of his chest, Telesdon, along with all of the other Spark Dolls, traveled to X and united with him. Cyber Telesdon's power was used to help form the Hybrid Armor and power up the Ultimate Xanadium to defeat Greeza once and for all. Telesdon, along with the numerous other Cyber Cards and Spark Dolls, then appeared and thanked Daichi as he thanked them.The Rainbow Land

Telesdon reappeared in episode 2 of Ultraman Orb as a Kaiju Card, used by Jugglus Juggler with his Dark Ring as part of his plan of waking up Maga-Grand King.

He reappeared physically in episode 9, where he emerged from underground to fight Alien Babarue Babaryu who was disguised as Ultraman Orb as part of a plan from the Planet Invasion Union. While the pseudo-Ultra was busy arguing with Alien Mefilas Nostra, Telesdon started the fight. First by head-butting him and then trying to attack him with his beak, but "Orb" barely caught the attack while protecting two kids that were left behind. After enduring a flame attack from the monster, Babaryu had enough and decided to fight Telesdon for real by putting him in a hold and pummeled him with his fists until he knocked him down to the ground. Afterwards, Telesdon escaped and burrowed away while the alien in disguise threatened him to get out and stay out.

He reappears in episode 24, along with Gomess, Demaaga, and Magata no Orochi.

In the beginning of the episode, he, Demaaga, and Gomess, rise from underneath Tokyo, but before they could attack, Orb appears in his Hurricane Slash form. However, as he says his catchphrase, and the three monsters gather to start the fight, suddenly, Gomess, Demaaga and Telesdon, all fall to the ground, dead. Orb feels Telesdon's hand for a pulse, but feels nothing but skin. Saddend, the Ultraman closes the monster's eyes and stares at the massacre before him.

Drill Formation Attack
Add a photo to this gallery
Re-Telesdon

Burrowing
Add a photo to this gallery
Cyber Telesdon

In Ultraman X, Telesdon's Spark Doll was reanimated by the Ultra Flare and caused it to rampage across the globe.

Telesdon first appeared in episode 31, where he was seen walking and teleporting with Eleking until coming face to face with Redman. The two of them decided to charge at him from different sides but the hero stopped them in their tracks. After a satisfying fight, Redman killed Telesdon with a few chops to the head followed by a judo throw. After that, he killed Eleking with his Red Knife.

Telesdon reappeared in episode 34 alone where he was wondering through the mountains when Redman teleports behind him resulting in another fight. Redman held the advantage throughout the fight even when it looked like Telesdon appeared to be winning. After tricking it into bashing it's head against a rock, the hero killed Telesdon with a Red Chop to the back of the monster's head.

In episode 59, Redman confronted Telesdon at a sandy beach and brutally assaulted him with a barrage of his chops and throws, despite the monster doing his best to hake him off. After a jump kick to the head, Redman defeated Telesdon with a Red Arrow that spewed out explosions that eventually made him pass out.

Telesdon reappeared in episode 67, where he teamed up with Garamon and had Redman on the ropes right from the start but the hero managed to get them off his back. The three of them then brawled it out on the beach with a lot of throwing, chopping, kicking, and tactics going on. When Redman summoned his Red Arrow, Telsdon caught him and took his Red Arrow away from him so he can use it against him when he was held by Garamon. However, Redman ducked at the last minute and Garamon ended up being the victim of this accidental kill. Outraged, Telesdon fought the hero once more but Redman defeat the monster by judo throwing him while holding his Red Knife.

In episode 74, Telesdon once again teamed up with Eleking to take on Redman and both sides were on equal terms with each other due to their advantages in numbers and combat prowess respectively. However, they did not have the means to put the alien hero down for good. After Eleking was killed by Redman's Red Arrow, Telesdon tried to escape, but he threw the Red Arrow at his back, killing him in the process.

Telesdon's final appearance on the show was in episode 78, where he was seen catching the alien hero's Red Arrow after it was thrown by Dorako. Redman managed to throw that item out of harm's way and resorted to using fisticuffs against the two monsters. Even though it looked like both monsters had Redman on the ropes, Telesdon found himself to be no match for the alien hero even though they held the team advantage against him. Both monsters were eventually defeated after the hero reclaimed his Red Arrow and drove it though their mouths, killing them as a result.

He appeared in the game, Ultraman Ball. 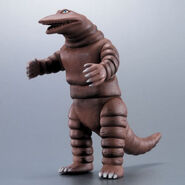 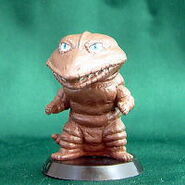 The 1991 Telesdon figure.
Add a photo to this gallery

Retrieved from "https://ultra.fandom.com/wiki/Telesdon?oldid=469867"
Community content is available under CC-BY-SA unless otherwise noted.