This armor was first worn and used by Zero as part of his exile after he attempted to steal the Plasma Spark. He lamented the armor for reducing his combat capabilities as he was unable to get on par against his teacher, Ultraman Leo. However, after he learned that Ultraseven was his biological father, and Ultraman King acknowledged his redemption, Zero was finally freed from the armor as he raced to the Monster Graveyard.

A Darklops Zero model, a prototype of the Darklops models was found wandering in space and was salvaged by the Alien Salome scientist named Herodia, who wanted to make use of him. He was fitted with the Tector Gear Black (テクターギアブラック Tekutā Gia Burakku), which enables the aliens to control his actions. During his first deployment to assist the Imitation Ultra Brothers (SR Team), he was proven to be capable of serving their needs, but he soon breaks free from Herodia's control. The Darklops Zero then smashed the armor with his own fist, causing it to break apart and freeing himself. Ultra Galaxy Legend Gaiden: Ultraman Zero vs. Darklops Zero

While confronting Alien Bat Gurashie's army of revived kaiju, Ultraman Zero was imprisoned by Gurashie into the Tector Gear Hatred (テクターギア・ヘイトリッド Tekutā Gia Heitorido). During his fight with EX Red King, Zero managed to make use of the armor as shown when both Ultra and Kaiju performed a similar headbutt attack but he was placed at a disadvantage again when Gurashie initiates the shock restrain functions. Eventually, Zero managed to escape with the help of Strong-Corona Zero. A New Power 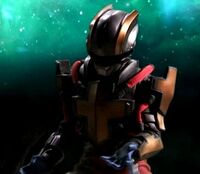 Ultraman Zero in Tector Gear Hatred
Add a photo to this gallery
Retrieved from "https://ultra.fandom.com/wiki/Tector_Gear?oldid=514573"
Community content is available under CC-BY-SA unless otherwise noted.