Protect the remaining children of Japan

None
Team U (チームU Chīmu U) is an informal, all-female defense team from the Future Earth World. Though not an official team, the group claim to have worked under the E.D.F. (Earth Defense Force). They used the U Loader machines to fight monsters.

After almost all the humans in the world disappeared, some remaining residents of Japan formed Team U. The team adopted a group of children, and defended themselves with the U Loaders they modified.

One day, when they were getting supplies, and Arstron appeared and began to attack them. Ultraman Dyna appeared and easily defeated the monster. After the fight, Dyna's human form joined Team U in their fight for survival. Then Hyper Zetton appeared and Asuka fought it, but only to be defeated and petrified. Team U then continues to survive until meeting Nozomu Taiga and Musashi Haruno.

When Ultraman Cosmos saved Taiga and a boy (Takeru) under Team U's care, the team of females brought the hosts of Ultraman Cosmos and Ultraman Zero to their base. After Alien Bat destroys the kaijus calmed by Cosmos and used Hyper Zetton to damage their base severely, Taiga and Musashi take off to fight the giant sized monster.

Takeru digs up the Lieflasher and Anna sends it to the petrified Dyna, reviving him but dies as a result. The three Ultras fought hard but lost, before merging into Ultraman Saga, reviving the dead captain of Team U.

Team U then assists the super Ultra by guiding them to send Hyper Zetton to one of their traps, allowing Saga to kill the ultimate form of the Space Dinosaur.

After that, Team U is seen with Taiga as the movie ends and the people of the world return to their rightful home.

Anna (アンナ An'na) is the captain of Team U. She has authentic athletic skills. She is 22 years old. She is the team's "eldest sister" and has a strong bond with Sawa especially. She is Risa's older sister.

Sawa (サワ Sawa) is a combat squad member of Team U. She's a tomboyish girl who hates losing. She has a lot of courage, and she has had a lot of successful strategies, which is why she calls herself the commando of Team U. She is 20 years old.

Misato (ミサト Misato) is Team U's deputy captain. She has an active role in taking advantage of knowledge and leads Team U in battle. She looks cool and calm and has a deep love for children. She is 22 years old.

Nonko (ノンコ Nonko) is responsible for maintaining the team's tech. She was raised as a mechanic and is really good at fixing all sorts of machinery. Has a bright and easygoing personality. She is 19 years old.

Maomi (マオミ Maomi) is responsible for the maintenance of various types of equipment with Nonko. Her family used to own a nursery. Her trademark are her glasses. She's 19 years old.

Hina (ひな Hina) is the operator of communications. She wished for the children to return to their parent's side, which is the reason why she keeps up the communication to the outside world. She is 18 years old.

Risa (リサ Risa) is Team U's medic. She knows the pain of loniness and usually looks at kids with a warm look. A gentle girl that loves to smile. She's 18 years old. 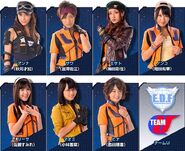