"Oh, great Don Nostra, do we really want to work with someone like that? I have heard that he was once on the side of light. He may be looking for a chance to stab us in the back."

Hiroyuki Arai
An Alien Metron appears as a member of the Planet Invasion Union named Tarude (タルデ, Tarude). He originally had planned to conquer Earth by using hallucinogenic cigarettes, but seeing as though fewer people are smoking cigarettes nowadays, he decided to call the plan off.

He first appeared in episode six of the series where he reported to his boss, Alien Mefilas Nostra about his previous plan and then he, along with the other members, met Jugglus Juggler who volunteered to take care of Ultraman Orb, who was the Union's main obstacle for conquering Earth. He then played a card game with Kaiju Cards with Juggler and Alien Nackle Nagus while they talked about the greediness of humans when Nagus' henchmen reported to him that the SSP and the VTL captain was walking around investigating their forest hideout. Once Jugglus left after Nostra thanked him for what he did, Tarude worried that Jugglus would not remain loyal to them because, according to him, he was once on the side of good and that he might stab them in the back when he gets the chance. Nostra reassured him that everything will work out, since he has his "trump card", Ultraman Belial's Ultra Fusion Card, with him should things go wrong.

"The Planet Invasion Union would not stand still after what he had done. This vengeance... must be fulfilled!"

―Tarude, Cleanup of the Heart.

His skepticism would be found true in episode 10 as Jugglus killed Nostra and Nagus for backstabbing him in their own deal and confiscated Belial's card. Tarude, who survived the incident due to not being around swears vengeance to Juggler.

"Such a beautiful sight. Will these sunsets...be swallowed by the darkness?"

He later reappeared in episode 20, engaging in a manhunt against Juggler to fulfill his vendetta. As he was about to strike him down with his own katana, Gai Kurenai showed up, allowing Juggler to escape.

Tarude warned Gai not to interfere with his personal vengeance, but because of Naomi's involvement (who briefly treated Juggler's wounds) Gai was forced to do so, leading to a giant battle between the Ultraman and the alien. Both first engaged in a ranged combat before Ultraman Orb assumed Orb Origin and performed Orb Wind Calibur, sending Tarude flying into the air and inadvertently destroyed his own saucer in the process. He then shot the Metron down with his Orb Supreme Calibur. As the sun set in their location, Tarude got up one last time and commented on how beautiful it was and then collapsed one last time after he questioned if the sunsets on Earth will ever be swallowed by the darkness and then exploded, seemingly ending the threat of the Planet Invasion Union once and for all.

Jugglus Juggler later revealed that he used Naomi and Gai to get rid of the Alien Metron for him to get his sword back and to get him off his back.

Tarude is the polite and gentlemanly Alien Metron who devoted to his fellow members of Planet Invasion Union as much as their cause in conquering Earth. He also shown to be perceptive, warning the group about the chance of Juggler betraying them upon learning his past allegiance. His loyalty to his comrades goes the extent where he sought to avenge their deaths after Juggler killed them in response of double-crossing him.

Despite remarking humanity as violent beings, the Alien Metron does found the beauty in their homeworld, as in his last moments, he wondered whether the sunset on Earth will be swallowed by the darkness.

Released as part of the Ultra Monster Orb line, "Alien Metron (Round Launcher)" is a retool of the Ultra Hero 500 Alien Metron figure, featuring round launcher arms to represent Tarude. He also comes with a Cyber Card of himself, compatible with the DX Orb Ring.

Tarude (right) and his fellow members of Planet Invasion Union 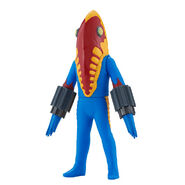