He was affiliated with Stardust Promotion until May 31, 2021. He is now active as a freelancer. 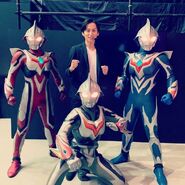