Takkong (タッコング Takkongu)[1] is a Kaiju that debuted in episodes 1 and 2 of Return of Ultraman.

Takkong was one of two aquatic monsters that rose from the depths of the ocean along with Zazahn. The two monsters began to do battle at once, smashing through nearby structures on the shores of Tokyo Bay. During the midst of their fight, a young man known as Hideki Go was killed while he was rescuing the lives a young boy and his dog from the two monsters' destruction. Zazahn and Takkong continued their titanic war until finally, the battle ended with Zazahn being killed by Takkong. Takkong then set his sights on the city itself, but a bright flash of light forced Takkong to retreat back to the ocean.

Takkong returned a few days later, attacking the MAT's underwater base. Luckily, they managed to drive him off with the use of two torpedoes, but not before it ruptured an oil line. Shortly afterwards, Takkong rose from the sea to feast on oil contained at a nearby refinery. As the creature hauled itself ashore, huge explosions erupted from the ground as it severed numerous crucial pipes at the facility, igniting the oil in the process. When MAT finally arrived, Go transformed himself into Ultraman. The red and silver hero grappled with the creature, but upon getting his head too close, the creature unleashed a blast of water, momentarily blinding the alien being. Regaining his composure, the hero tore off one of the monster’s limbs before hitting it with his own Spacium Beam. The intense energies sent Takkong to the ground, sparks rising from its body before the entire behemoth exploded.

Takkong was one of the three monsters (alongside Pestar and Gamakugira) that were awakened on Water Planet Nuock after its inhabitants were fighting against each other. Gai transforms into Ultraman Orb and defeated all three monsters.

A manifestation of the sea, Takkong is a guardian creature that had sealed away the embodiment of Earth's anger, Giestron, for many years. Over time, its ability to keep Giestron pacified had grown weaker and weaker as it grew older.

In the present day, Takkong reappeared at night in the city, sensing Giestron's return, and managed to scare off a couple. Hiroyuki immediately appears and transforms into Ultraman Taiga to defeat it. It anchored itself down to the ground, refusing to battle the Ultra. Titas was summoned to pull up Takkong, but the monster spat out an oil stream which the Ultra slipped on and the monster went invisible. Fuma came out to track it with his Ultra Sonar, but it put itself down again, making it so it could not be harmed. Eventually, the Tri-Squad's time ran out and they reverted to Hiroyuki, allowing Takkong to continue further in the city. It fed on some oil before going to sleep, a bubble forming from its nose.

Later during the day, Takkong was still sleeping and had to be woken up by Shinji when Giestron finally appeared from beneath the ground. The two monsters proceeded to fight each other, but Takkong was overwhelmed and beaten. Giestron then began to control the Earth's electromagnetic energy, trying to cause much of the planet's magma to seep to the surface and end the world. Taiga appeared and used his Hand Beam to interrupt the monster, engaging it in a fight. In his normal form, he barely did anything and got pushed away like Takkong. Giestron tried to attack him with an energy boomerang which was then blocked by Takkong. Taiga checked to see if the monster was okay before changing into Tri-Strium. The guardians of humanity then teamed up against the beast, both assaulting Giestron from different directions. Takkong spun around rapidly and surrounded itself in fire before ramming into the monster, dealing serious damage and allowing Taiga to come in with the Taiga Blast Attack, destroying Giestron and likely ending its threat for a long time to come. Taiga and Takkong then gave each other a high-five as celebration.

At sunset, Takkong left for the ocean as Hiroyuki and Shinji watched it, saying that Giestron would one day rise again and that the sea incarnation would rest until then. Shinji told Takkong to sleep peacefully before strangely disappearing into bubbles Hiroyuki looked around confused before seeing the young boy on Takkong's back. They both waved goodbye, Shinji's hands turning to tentacles as they descended back into the blue waters. What's up with Takkong?

Takkong rises from the sea alongside King Guesra in their attempts to eliminate Ultroid Zero, being delayed in their plan by Ultraman Z. The two worked in tandem, beating back Z's defenses and even dragging the warrior under the water to commence their attacks. After Z was knocked out of the fight for a short time, both made their way to where Ultroid Zero was fighting Demaaga, Pagos and Gomess (S), only to be jumped by Z again. After using Beliarok and it's signature attacks, the two rampaging sea monsters stopped their advances and returned back to the ocean. Prelude to a Nightmare

At one point while Jack was on the planet of the Aquatic Homids, Takkong, Pestar, and Gubila appeared from the sea to attack the aliens. Jack took immediate action and fought off all three, eventually destroying them with a single Spacium Beam. 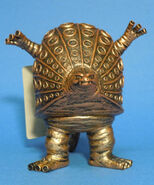 A golden figure of Takkong. 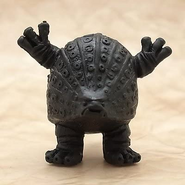 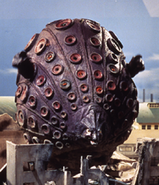 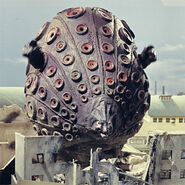 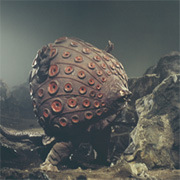 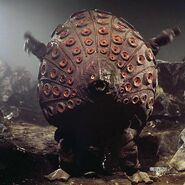 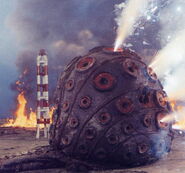 Fighting Ultraman Jack along with Pestar 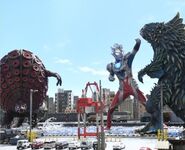 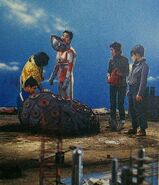 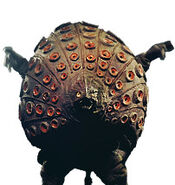 Takkong on a soft drink with Jack.