Coming to Earth, Ultraman 80 took on a human form and the identity of Takeshi Yamato. Takeshi's theory was that monsters were born of the energy created by negative human emotions, also known as Minus Energy. He decided to become a teacher at Sakuragaoka Junior High School in Tokyo, and served as a science teacher, as well as the home room teacher responsible for 1st Year, E Division. He was absolutely dedicated to his students, for he was there to teach them not just about science, but also about life. Unfortunately, he had a penchant for being late, so he does things like promising his students to walk to class on his hands if he is late next time, or even promising to resign as a teacher.

He even started up a band with his students and jammed on an electric guitar. His over-enthusiasm quickly won the loyalty of his students, but often made him an easy target for the prim Deputy Schoolmaster Kumi Nozawa. Takeshi loves rice, bakso and orange juice. He also had a crush on Kyoko Aihara, the gym teacher, but would lose all confidence in himself and sense of composure in her presence.

Takeshi would don an orange and silver suit to moonlight at UGM (Utility Government Members), the regular Earth defense team, after school and on Sundays. He acquired the job from Captain Oyama because they were both present at a park in the first episode, looking for signs of new monster activity. Oyama was happy to meet someone who believed in the re-emergence of monsters.

Even his own team members had their doubts, since none of them had any combat experience like their veteran captain. At school, only Principal Kennosuke Hayashi knew of Takeshi's extracurricular activities.

After Mebius and 80's battle with the monster Hoe, he later appeared at a private class reunion in Sakuragaokaka Junior High School. Originally he was not going to join because he felt he had let down his students, but he was proven wrong as the students showed their gratitude for him both as their teacher and as an Ultraman. He then decided to go to the school reunion.

Takeshi thrusts his fists left, then right, before holding the Bright Stick up in the air and shouts "80!" as the rod's button activates and then emits light that transforms Takeshi into Ultraman 80.

Takeshi in the first episode 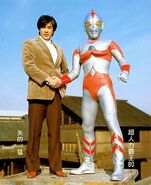 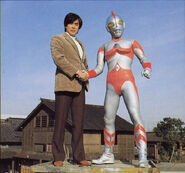 Takeshi and Ryoko turning back to their Ultra form.