Maritime Self-Defense Forces
Beast the One

Takafumi Udo (有働貴文 Udō Takafumi) is the human host for the main antagonist of ULTRAMAN, Beast the One.

Udo is a 30-year old member of the Maritime Self-Defense Forces and a fiance of 28-year old inspector general of Secret Military Agency BCST, Sara Mizuhara (see TLT). When a mysterious ball of blue light detected in the Pacific Ocean, he and his crew sent to investigate it. However, the object attacked the whole crew and killed every one on board save Udo whom it took as a host, changing him physically and genetically as it withered away at his humanity.

Taken back to a lab for interrogation, he absorbed lizards to transform into a lizard like humanoid creature which escaped by slaughtering its way through anyone who dared to get in it way. Before leaving he was shot by a poison bullet by Udo's former fiance Sara, injured it escaped thanks an emotional moment of weakness. The One then went on to slaughter an entire navy boat before being seen again with Udo's last words is for begging Sara to kill him before his will is fully taken over by the beast.

While his body has been possessed by the one, he has these following abilities, as it appears as a normal person but mutated with scaly and spiky skin with fangs for teeth and claws, it is still dangerous.

The powers of this form are present in all of the One's later forms. 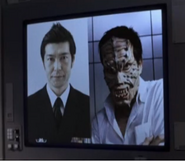 Udo's appearance one week after Beast the One infected him.
Add a photo to this gallery
Retrieved from "https://ultra.fandom.com/wiki/Takafumi_Udo?oldid=493156"
Community content is available under CC-BY-SA unless otherwise noted.