None
Taishoh (タイショー Taishō) is a Kaiju who appeared in the TV series Ultraman Leo.

Originally a 4th grader of an elementary school for monsters in outer space, Taishoh was imprisoned by his father in a small pot after he refused to study. He was thrown into outer space and landed on Earth where Miyasaka, a local bully, picked up the pot. While writing his homework, he felt stressed out and rested on his bed. Until he suddenly heard Taishoh crying for help, he peeked through a hole in the bottle and spotted the monster. He spun a green button on the bottle, which released Taishoh. After stretching out his body, Taishoh was ordered to help Miyasaka with his homework but failed and began on a small rampage on the boy's room until Miyasaka spun a red button on the pot, sucking Taishoh back inside.

The next day, Miyasaka brought along Taishoh to school hoping for the monster to help him. But instead, this made things gone worse for the boy as Taishoh accidentally urinated and it spilled onto the boy's classroom. Miyasaka was punished by his teacher to wipe out the spilled urine as he poured it back into Taishoh's pot. At home, Miyasaka scolded Taishoh but he pleaded for forgiveness. Miyasaka agreed and realized that he can use Taishoh to destroy his school.

He put his plan into motion by having Taishoh grow into large proportions. However, this had made Taishoh unable to recognize Miyasaka again, only remembering his goal: to destroy the school. Taishoh first tried to rip off the school building but failed. After accidentally stepped onto an object that exploded on his feet, Taishoh quickly grew stronger and managed to destroy the school. This eventually attracted MAC forces as they attacked Taishoh from ground and air. Gen Otori came to the scene and transformed into Ultraman Leo. Panicked, the boy told Taishoh to retreat but failed as Leo dueled the monster in a comical wrestling match. Miyasaka spun the red button on the pot, bringing Taishoh back to safety but later angrily washed the pot after he urinated again.

Then he planned out to punish Taishoh by having himself and his friends attacked him in a manner of Miyasaka as Ultraman Leo and the others as MAC officers. Toru and Kaoru stopped Gen and a MAC member (whom happened to be on a routine patrol), seeking their help to track Taishoh. While Taishoh tried to run from MAC officers, Toru, Kaoru, Miyasaka and his friends, he unintentionally feared and caused trouble to several citizens. Upon finding the monster trying to climb a chimney, MAC officers fired their weapons to him but stopped upon finding out that all the monster ever wanted was to return home. Miyasaka tried to use the pot to save Taishoh but the red button that used to retrieve him accidentally broke. Suddenly, the chimney began breaking apart under Taishoh's grip. Realising he was in danger, he called out for Leo's help several times before falling off, though he was saved by growing to his full size. When he heard the sound of MAC's planes approaching him, he attempted to run away, but was repeatedly strafed, and declared that he wanted to go home. With Dan's permission, Gen transformed into Leo again, and ordered MAC to stand down. He brought Taishoh back to his homeworld by carrying the monster on his back. Miyasaka however still missed Taishoh even after his hatred towards the monster prior. 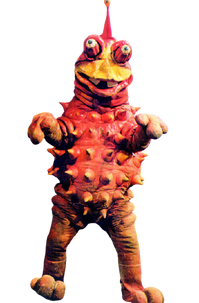 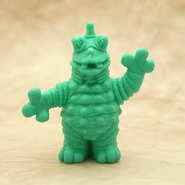 A Taishoh eraser
Community content is available under CC-BY-SA unless otherwise noted.
Advertisement