A rather easily frightened monster that first emerged one year before the events of Ultraman Cosmos, he appeared out of the ground near a town one day and EYES managed to spot him. He was attacked and shot with a NX-0117 missile, but it lodged on his back. He soon dug underground to escape and hadn’t been spotted since.

Taildas reappeared in the present day and met EYES again, who upon noticing the missile (which was surprisingly still active), tried to remove it without hurting the monster. However, upon recognizing EYES from before, it escaped by burrowing away. He appeared a second time and EYES tried again to remove the missile. Before they could remove it, Chaos Organisms soon turned the creature into Chaos Taildas. The monster began to attack EYES and Musashi, who had managed to remove the missile while also crash-landing at the same time, turned into Ultraman Cosmos to fight the monster but had a hard time fighting him. He went into Corona Mode but still hadn't had the upper hand. The blue and red giant then changed to Eclipse Mode and finally had a better chance of fighting the monster. With a shot of the Cosmium Beam, the Chaos Organisms were expelled and Chaos Taildas turned back to normal and went back underground.

Captured by Alien Nowars, they took the peaceful monster and modified him into their cyborg monster. He arose one day in the city smashing buildings and streets and EYES could only watch the destruction. Shockingly, it stopped and white fluid came out of its jaw as the monster died due to the incompatibility with the cybernetic body parts. It was brought to EYES Base for an examination before a burial can be made. 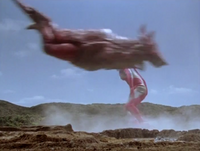 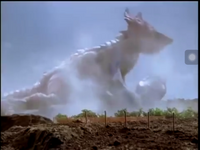 Ultraman Cosmos get pinned by Taildas 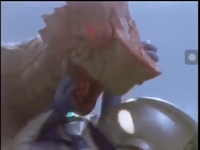 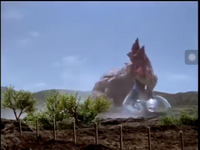