None
Taigan (タイガン, Taigan) is a liquid monster summoned by the Invaders to fight Mirrorman in his titular series. After absorbing several animals at a zoo, he took the form of an elephant-like monster with tiger-striped body parts and a tiger's tail.

One day the Self Defense Force encountered an armed probe by the Invaders. After it was shot down, a capsule inside landed near a zoo. Emerging from this capsule was the monster Taigan in his liquid form. He proceeded to absorb an elephant into his body. After that the SGM located the monster's capsule and returned it to their base. Kyotaro decided to take a picture tour of the zoo, soon noticing that Taigan absorbed a tiger in seconds. An Invader stole Kyotaro's camera to damage the negatives, thereby destroying evidence of Taigan's existence. The zoo security alerted the police to their missing elephants and tigers while Kyotaro informed SGM who concluded Taigan might be a type of space bacteria. SGM went to the zoo and spotted the growing monster only for three Invaders to ambush them from behind, allowing Taigan to vanish. At the base Dr. Mitarai believed it would begin to attack humans just before learning of the tissue remains in the capsule. Taigan was then spotted at a construction site, the SGM was informed and proceeded to attack him. At the base the tissue sample was given a lab rat to feed off of, showing that it was energized by more complex organisms and would become more hungry upon growth. Taigan's course had him to attack a science lab where new defense satellites were being made. The tissue sample simply died off as the creature was unable to cell divide.

SGM managed to locate Taigan at a gasoline storage sight only for Invaders to ambush them once more, this time knocked out by pistol whipping. Kyotaro defeated two and led the other four into an abandoned warehouse. The Invaders left, but not before locking Kyotaro inside. Taigan managed to find the lab while the Invaders fougth with SGM. Kyotaro soon became Mirrorman to save the scientists using the reflection of the Sol-gun by throwing Taigan out the window. An Invader shipped used a beam to turn Taigan into his monster form, forcing the hero to grow and fight him more. Mirrorman grabbed the monster by his tusks only to be bashed and strangled by Taigan's powerful trunk repeatedly. Mirrorman soon used the Mirror Knife to Taigan's face, angering it as it launched both its tusks at him, missing both times. After that he used his trunk as a pressurized hose against the hero, stunning Mirrorman while he was down. The hero continued assaulting Taigan, soon using the Slicer H to slice off Taigan's trunk and destroying him via the Silver Cross.

Taigan appeared in episode 36 of Mirror Fight. Stock footage of his fight in Mirrorman was reused in this series.

A figure of Taigan 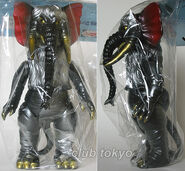 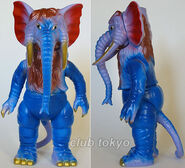 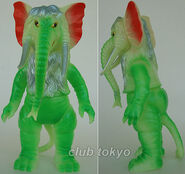 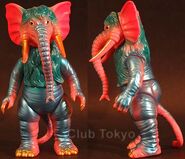 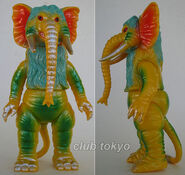 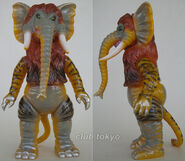 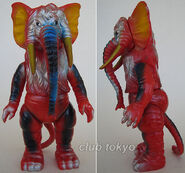