"We Ultramen turn into Astral Particles and that information is embedded in a key-shaped terminal. If the key is read into the Astral Particle Conversion System, we can fight within a certain period by borrowing the bodies of life forms with different quantum structures."

The Taiga Spark, formerly called the Astral Particle Conversion System (アストラル粒子転化システム Asutoraru Ryūshi Tenka Shisutemu), was invented a long time ago by Ultraman Tregear, who was working under Ultraman Hikari after failing to join the Inter Galactic Defense Force. The item's main purpose is to reconstruct the Astral Particles of an Ultraman to suit the conditions of universes with different quantum structures. Further development of the device was put on hold after Hikari's resignation from his office.

"Let's see, we could use the word that means "a brave one who embraces the Sun", Taiga! How about Taiga Spark? It will be proof of our bond."

Tregear managed to complete the device using data on the "Power of bonds" given to him by his old friend Ultraman Taro. Tregear initially wanted to name it the Taro Spark (タロウスパーク Taro Supāku), but Taro wanted to name it for the next generation, giving it the name Taiga Spark which Tregear agreed to. Ultraman Taiga Novel: Tregear's Story/Blue Shadow The Divergence It was given to Ultraman Taiga by Taro through his own Taro-let, his own son being named after the very device that he and Tregear had created. Titas and Fuma acquired their own copies at some point after Taiga meeting them in their respective home worlds and finally forming the Tri-Squad.

In addition to transforming, the Tri-Squad used their Taiga Sparks to harness their respective attacks or augmenting them with bracelets from New Generation Heroes and rings of several defeated monsters. Due to the Tri-Squad's merger with Hiroyuki, the latter acquired his own Taiga Spark as a means of transformation into any of the three Ultras. Buddy Go! However, continuous usage of the rings further corrupted Taiga into the darkness. By the time his bond with Hiroyuki was severed, Taiga briefly lost access to his namesake device, regaining it once the Tri-Squad rescued him from the darkness. Ever since Taiga acquired Tri Strium, the Taiga Spark stored the Taiga Tri Blade and unleashed it to be used whenever it's needed. We Are One

Hiroyuki slides down the Ignition Lever, causing the Buddy Crystal to light up and activate the device, then takes a specific Key Holder and scans it at Buddy Sphere.

Once the hidden Ultra Energy is released, it can connect the bonds between humans and Ultraman. By reading the Ultra Taiga Accessories with the Taiga Spark, one can borrow the powers of heroes and monsters sealed inside.[2][3] 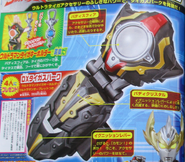 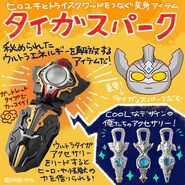 Hiroyuki is granted the Taiga Spark

The Taro-let transforms into the Taiga Spark