To investigate, research, and defeat the Space Beast threat

Ultraman Nexus episode 37 "Bond - Nexus -"
Several years have passed since the events occurred with the appearance the beings code named "The Next" and "The One". The Earth exists in relative peace, but secretly strange monsters called "Space Beasts" stalk citizens, killing them in many cases.

To combat this threat, the Terrestrial Liberation Trust (地球解放機構 Chikyū Kaihō Kikō) (TLT), a global, clandestine organization is set up to investigate and defeat the "Space Beasts". In Japan, the base of TLT Japanese Division, or TLT-J, is located secretly in the mountains under the facade of a hydroelectric plant called Fortress Freedom (フォートレスフリーダム Fōtoresu Furīdamu)

The origins of TLT go back to the source of the problem that plagued humanity and perhaps countless other species in the universe, the Space Beasts, more specifically their master Dark Zagi. Some time ago the being known as Ultraman Noa came into existence through unknown means (rumored to be a supernova in Messier 80 in the Scorpio Constellation). Since that time the silver giant traveled space fighting evil while bonding to several hosts. A race of beings, known to TLT as the 'Visitors' saw this and proposed the creation of their own personal protector, a clone of the silver giant. They fail, for whatever reasons the clone became a twisted mockery of the paragon of justice and created an army of monsters to destroy all life. To stop him, the visitors tried to kill him by destroying their planet. Though Zagi was not killed by some means he was separated from his body and left as a ball of dark energy. His body was used to create the alien construct known as Lethe.

Knowing his eventual goal the visitors headed to Earth with Lethe and crashed in the Arizona desert. The US army that found them was told by the aliens that they would be willing to give their technology so long as it was only for the defense of the Earth against the oncoming threat. Communication was accomplished by the use of a young psychic boy named Kaimoto, through whom the Visitors explained their background and the incoming danger.

The was first steps to the foundation of TLT, scientists from around the world were brought to Arizona and numerous countries around the world entered this alliance. However it would be nineteen years before the first Space Beast would appear. During this time several projects were being worked on several projects, the development of the first Chesters, the Night Raiders' weaponry, the development of the Visitors Potential Barrier to slow down the appearance of Space Beasts and the Prometheus project to name a few.

At some point in time Zagi made his way to Earth and possessed one of the scientists working with the visitors. Using this host body he slaughtered perhaps everyone there including young Nagi's mother and father. Encountering the young girl after the fact he clouded her memory and let live as she was integral to his master plan.

Thirteen years later after the Visitors arrived, the first Space Beast, Beast the One, appeared in the Seas of Japan possessing a young man named Udo, who was part of the BCST an anti-bio terrorism organization working with U.S forces. He was eventually defeated by the silver warrior code named the Next, a lesser form taken on by Noa.

After those events TLT erased the entire world's memories and media information pertaining to the battle between Ultraman and the One and created their first cover up story of a meteor shower devastating Shinjuku. Afterwards the Night Raiders and other divisions of TLT began to operate as the battle between Noa and Zagi progressed on Earth. In time the space beast menace began to evolve, with more and more giant beasts appearing in place of the more human sized variants. This lead to TLT upgrading their arsenal and declaring Ultraman an ally, despite their initial posture towards him.

Yu Kirasawa, also known as the "Illustrator", is the TLT's strategist, usually coordinating the Night Raiders' operations against the Space Beasts as part of the CIC (Combat Information Center) Mostly appearing in the form of a hologram, he knows more about the Space Beasts and Nexus than he seems to let on. It is eventually revealed that he is also a son of Prometheus, like Ren, and lived in the same facility with him in Dallas. When Ren was caught trying to run away from the place, he gives Kirasawa a rope necklace. He also is the first one to confront Unknown Hand when he revealed himself and attacked the base.

Yoichiro Matsunaga is the director of TLT-J. It was revealed later in the series that his wife was one of the casualties during the battle between Ultraman the Next and Beast the One 5 years prior leaving his relationship with his daughter distant at best. In order to better protect the planet from the threat posed by the Space Beasts, he wishes to know the secrets of Ultraman's Light, and the Deunamists to the point of forcibly conducting experiments on them when they are weakened from numerous battles.

Shutou Saya is the head of the "Memory Police" (MP) division which is responsible for erasing the memory of people who should not know of the existence of the Space Beasts. However, this division is regarded useless after Zagi's death.

Sara Mizuhara is an investigator from United States' TLT, originally a scientist for BCST, she was the one who assisted Maki (The Next) stop in stopping The One (formerly her fiance Udo), and witnessed their battle 5 years prior to the series first hand. She returns to Japan to investigate the possibility of their being a spy in TLT and explains the origins of TLT to the Night Raiders as well as why memories are erased.

Hayato Kaimoto: The psychic used to first communicate with the Visitors he now serves as Sara's assistant. His DNA was used to make all the Prometheus children making him their technical father. He was also the masked man spying on Ren during his time as a Deunamist.

Wakura Eisuke: The captain of the Night Raiders. He is a good leader and takes action effectively in any situation. He cares for his teammates and well trusted by them. Although his motto is to follow orders, he will take necessary action if it means to protect others. He is a brother figure towards Komon who provides wisdom to the new recruit.

Nagi Saijyo: The deputy captain of the Night Raiders. She is very strict, especially to Komon and can be quite brutal in certain situations. She hates Space Beasts, stemming from incidents regarding her childhood and her former lover Shinya Mizorogi, the former deputy leader of the team. When she was younger, her mother was murdered by a Space Beast (In the end revealed as Dark Zagi in human form) in front of here along with her father and the rest of the research team located in Colorado. After she joined the Night Raiders to fulfill her vow to destroy the beings that killed her mother, she met and eventually fell in love with Mizorogi Shinya, the former deputy leader of Night Raider. When Mizorogi fell to the dark side, she deepened her hatred and was willing to do anything to bring down a Space Beast, which she does not know that the hatred is actually a trap set up by Dark Zagi to make her surrender all of the light to him when she become a Deunamist. In the finale, she was saved by Komon when the darkness tries to devour her.

Kazuki Komon: The main character of the series and sometimes the narrator. He is also the fifth Deunamist of Ultraman Nexus.

Shiori Hiraki: A female in the Night Raider team. She is an expert in weapons and can be very strong and helpful during missions. She has a good personal relationship with Mitsuhiko Ishibori. After Nagi becomes the fourth Duenamist in the final episode, Shiori is shot by Ishibori when he reveals himself as Dark Zagi to the team, but is later shown defending people with rest of the Night Raiders from Beasts in the closing scenes of the series.

Mitsuhiko Ishibori: The analyzer and tactician of the team and an expert in computers.

TLT has been described as a series of gears with more individual divisions than just the Night Raiders in their fight against Space Beasts. These range from everyday personnel, to specialists in disposal, to the self explanatory Memory Police and strategy division

Along with the Memory Police, this division of TLT appear after the Night Raiders' and Ultraman's battles with space beasts to dispose of all and any space beast remains. They are effectively the clean up crew of the organization and an important part of TLT's battle against the space beast as they make sure defeated Space Beasts do not regenerate. They are also used for the live capture of individuals such as the Deunamists Jun Himeya, Ren Senjyu and Mizorogi Shinya. Also any person joining TLT has to undergo an examination to ensure they are normal humans, most likely because of the One. This is also performed by the White Sweepers or at least TLT members in the same gear.

This division is comprised of agents in black suits, their main purpose is to erase the memory of any one who has seen a Space Beast and block all Space Beast related information from reaching the media. They use technology in their phone for their task but it is locked to memories relating to keywords involving Ultraman and the Space Beasts.

These are TLT's normal forces, usually acting as guards and maintenance crew in their base. However they appear to be trained solders, brandishing machine guns at intruders also serving as riot control during the Mega Flash incident, working to keep the city quarantined.

The scientific branch of TLT, it is house primarily in the US branch in Colorado. They are know for running the Prometheus Project, a genetic experiment using Hayato Kaimoto's DNA and that several others, to create perfect 'human beings'. These 'Prometheus Childen' go to school on the compound, earning a college degree and usually going to work for TLT as scientists. Their star subject was Ren Senjyu who ran away and eventually became Deunamist. The purpose of their project was to create a being who could communicate with the Visitors.

Thanks to their technology from the Visitors TLT arms their Night Raider unit with advance equipment to combat Space Beast when on the ground. All Night Raider weapons fire energy bullets. 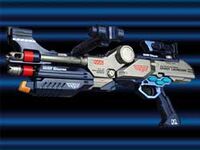 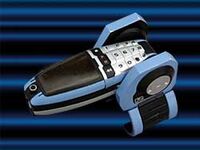 Pulse Breigar in combat mode
Add a photo to this gallery

Thanks to the technology granted to them from the Visitors, TLT arms their Night Raider unit with advance machines to combat Space Beasts in the air and when they reach giant size. As more giant space beasts started to become more and more in place of the more human sized variants, as well as their continued evolution TLT was forced to upgrade their arsenal creating new Chrome Chesters and Chester configurations. 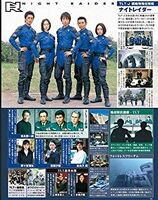 Retrieved from "https://ultra.fandom.com/wiki/TLT_(Terrestrial_Liberation_Trust)?oldid=531178"
Community content is available under CC-BY-SA unless otherwise noted.