Living deep within the wilderness of the Canadian province of Alberta and viewed as a god by the native Canadians, Syazac lived in peace with the rest of mankind until its presence became known. Even though Syazac seemingly posed no threat, The American branch of G.U.A.R.D quickly set up and went in to defeat the beast, and soon, XIG was called in from Japan. Gamu met up with one of the American members: a trigger happy woman named Catherine. The two soon awoke Syazac and led it off a cliff with their jeep and detonated a slew of bombs beneath it, but the victory was short for the quilled Kaiju rose up mere hours after, angered by the sudden attack. The X.I.G fighters quickly attacked it, but to no avail and when Catherine was injured, Gamu morphed himself into Ultraman Gaia. Gaia fought the beast, but the Canadian monster rolled up into a ball, quickly battering the hero and preventing him from hitting him. As the battle raged, Gaia went supreme and slammed the creature into the side of a cliff. As Catherine woke on the ground, a baby Syazac wandered into the area. Yelling at Gaia to stop the battle just as the two were about to clash once again, she managed to prevent Gaia from killing Syazac and allowing the creature to venture back into its woodland home. Battling the Legend

Months later, as the war against the Dobishi swarm went on, Syazac rose again to defend the lush Canadian forest around it. The mighty beast of legend, with its young, unloaded their energy blasts against the swarm. The forest guardian fought valiantly, taking down Dobishi until the war was over where it then returned to its life of peace. Earth is Ultraman's Star 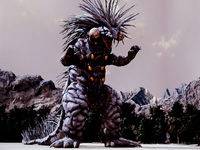