http://art-promotion.jp/prof_male02_kurobe.html
http://homepage2.nifty.com/ada-ky/kurobe/index.htm
Susumu Kurobe (黒部 進 Kurobe Susumu) is a Japanese actor in the Ultraman Series and more of Tsuburaya's movies whom mostly known for his role as Shin Hayata in Ultraman and later the titular character himself, succeeding Bin Furuya. His real name is Takashi Yoshimoto (吉本 隆志 Yoshimoto Takashi). His stage name is derived from his birthplace.

His eldest daughter, Takami Yoshimoto was known for her role as Rena Yanase in Ultraman Tiga.

He became a grandfather for the first time in 2011, when his daughter Takami Yoshimoto gave birth to her son.

Susumu Kurobe raising the Beta Capsule, with his friends representing each of their roles as human hosts of Ultramen 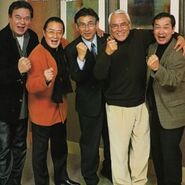 Susumu Kurobe holding hands with Hiroshi Fujioka next to the statues of their respective henshin forms.

Kurobe as Older Hayata is contacted by Ultraman

Kurobe as Older Hayata in Class A uniform

Kurobe as Older Hayata paying respects to the departed, specifically his captain