Ultraman Saga
Super GUTS (Super Global Unlimited Task Squad)[2] (スーパーGUTS Sūpā Gattsu), or shortened as S-GUTS, is the human task force in the Ultraman Dyna TV series, succeeding its predecessor team, GUTS in Ultraman Tiga. They were one of the few teams that were not disbanded. They appeared in all 51 episodes of Ultraman Dyna and involved some of the most successful battle machines in the Neo Frontier Space World. In Ultraman Tiga Gaiden: Revival of the Ancient Giant, the group is once more succeeded by Neo Super GUTS.

15 years after Asuka's sacrifice in Ultraman Saga, the Japanese branch of Super GUTS were transferred to the Mars division, with many of its members promoted to higher ranks.

The Grandome (グランドーム Gurandōmu) is the base of Super GUTS. It is a tall tower with a disk center and is operated by TPC personnel. The giant disk can open apart and reveal the launch bay of the GUTS Eagle.

Aside from just housing Super GUTS' main mechas, it also contains GUTS' old Ride Mechas, as revealed in episode 32 when TPC's possessed-exploratory robot Lovemos assimilated with every of their Ride Mechas into Satan Lovemos.

The Clarkov NF-3000 (クラーコフNF-3000 Kurākofu NF-3000) is a large mobile base that Super GUTS and other TPC personnel use for missions and research. The base was used as the final defense system for humanity against the threat of Gransphire.

Gousuke Hibiki (ヒビキ・ゴウスケ Hibiki Gōsuke): The team captain. He is loud and boisterous, often joking with his subordinates and shouting orders. At the same time, however, he is a caring leader with a good heart and good intentions for Super GUTS. His daughter, Sonoka is a member of the Roller Kids, a team of troublesome rollerskating teenagers. In Ultraman Saga, he had been promoted to the Inspector General of TPC and can be seen in the hologram of the Mars Base where he honors the 15th Anniversary of Asuka's sacrifice.

Toshiyuki Kohda (コウダ・トシユキ Kōda Toshiyuki): The level-headed, right-hand man to Captain Hibiki who is officially promoted to Deputy Captain in episode 34. He is always seen to be calm and dutiful - though can be hot-headed at times. During his time as a cadet, Kohda looked up to GUTS Deputy Captain Munakata. In Ultraman Saga, he had been promoted to Chief of Staff of the TPC Space Development Agency.

Ryo Yumimura (ユミムラ・リョウ Yumimura Ryō): A tomboyish ace pilot of Super GUTS, who has a short temper and often yells at Asuka for his goofball antics and recklessness, given that she had once becoming the ZERO Squad instructor as she met Asuka before as a student. They have a pilot rivalry going on. However, deep down inside she likes the guy, which becomes quite clear toward the end. She also plays a big sister role for the less experienced Mai. Ryo is slightly cross-eyed, which adds to her charm.. She is always seen wearing sunglasses each time while piloting the GUTS Eagle. During episode 22, Ryo witnessed her old friend, Ayano, being preyed upon by the human-sized Mozui. This caused Ryo to develop a phobia of the monster. Ryo had to overcome this fear in order to help defeat Mozui. In Ultraman Saga, she had been promoted to the Captain of Super GUTS.

Mai Midorikawa (ミドリカワ・マイ Midorikawa Mai): A cute, bubbly, loud cadet-type with little combat experience. Mai is also nicknamed Dyna's "godmother" for naming the Ultra. She mostly serves as the communication person, but she has multiple crushes (baseball players, cute exploratory robots, bike racers, etc.), gets peoples' attention by saying 'neh-neh-neh,' and has the amazing ability to hide multiple items behind her back, only to whip them out in rapid succession. She is rarely seen without that ability when she goes on a mission. In Ultraman Tiga & Ultraman Dyna: Warriors of the Star of Light, she was put into coma after Deathfacer, making Asuka loses his will to fight the robot until he was encouraged by Hibiki and Iruma. In Ultraman Saga, Mai was appointed an instructor of training school ZERO.

Tsutomu Nakajima (ナカジマ・ツトム Nakajima Tsutomu): The pudgy technician and researcher of the Super GUTS team, who often becomes panicked or overly serious. He is also often very sarcastic and enjoys eating fried chicken. During his youth, Nakajima's family was very poor due to his neglectful father. This caused him to develop a disdain towards the man, which would also motivate him to become a scientist who was respected by everyone. However, deep down, he still respects his father. Nakajima resembles Horii from the original GUTS. In Ultraman Saga, he had been promoted to the Chief Scientific Officer of Super GUTS.

Kouhei Kariya (カリヤ・コウヘイ Kariya Kōhei): The sharpshooter of Super GUTS who is also an expert in archaeology. He is very much concerned with the protection of the natural world as seen with his reluctance to kill the kaiju Sodom or Gigantes. Kariya is often seen drinking out of his metal cup. On one occasion, he was possessed by the Alien Nuaza Eshilis. In Ultraman Saga, he had been promoted to the Deputy Captain of Super GUTS.

Shin Asuka (アスカ・シン Asuka Shin): Ultraman Dyna's human host. He is light-hearted overall, and is one of the rare Ultra human hosts who also serves as the comic relief of the show. Asuka often whines and pouts immaturely, and sometimes pretends that he is killed in combat just to see his teammates freak out. Asuka is not all just fun and games, though. He can also be headstrong and overly courageous. Despite his personality, Asuka is an exceptional fighter, fending off aliens far stronger than normal humans with only his hand to hand combat skills. His well-known motto is "Never give up." Asuka's dad disappeared years ago when his spaceship disappeared into a mysterious light, which Asuka himself enters alongside his father in the final episode. In the end, Asuka ended up transported to the World of the Land of Light where he joins the ZAP SPACY crew in their battle against Ultraman Belial. He travels again in the self made wormhole which brings him into a battle against a new menace.

Hanejiro (ハネジロー Hanejirō): A strange alien which Asuka befriended on a mission to a mysterious planet, it first helped Asuka (as Dyna) by pointing out Mons-Ahgar's weak spot during a battle, and was since made Super GUTS' "mascot" of sorts. Bids farewell to Super GUTS in episode 47, but returns in the Dyna movie Ultraman Dyna: The Return of Hanejiro.

Nozomu Taiga (タイガ・ノゾム Taiga Nozomu): The latest member of Super GUTS and a former human host for Ultraman Zero as of the events of Ultraman Saga. 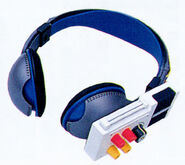 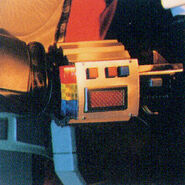 Like GUTS, the mechas used by Super GUTS are known as Ride Mechas (ライドメカ Raido Meka).