None
The Sukunaoni (宿那鬼 Sukuna Oni) is an ancient demon from decades ago that was killed by a samurai. He first appeared in Ultraman Tiga episode 16.

Sukunaoni was an ancient demon swordsman that tormented ancient Japan until his reign of terror was put to an end by a legendary, monster slaying samurai named Kagetatsu Nishikida. The warrior finally put the demon down and dismembered his body into six pieces, sealing the demonic warrior below Sakuna Mountain with his sword and a statue. It would be several centuries before the world would lay eyes on the Sukunaoni again, when a group of thieves broke into the shrine that held the objects keeping the oni sealed beneath the Earth. Later that night, after the holy relics were removed, Sukunaoni’s fist erupted from the side of a mountain, a man walking along knowing the legend and quickly alerting GUTS to the awakening demon in hopes of stopping Sukunaoni before his dismembered body could reassemble itself.

Meanwhile, the spirit of the samurai possessed one of the thieves and slew one of the others with his ancient sword, prepared to once again defeat his archenemy once again. As GUTS examined the shrine, Sukunaoni's dismembered body parts began tearing themselves free from the mountain, preparing to reassemble the demon samurai. Daigo soon found the samurai, who teamed up with him to try to stop Sukunaoni from fully reviving by destroying his head before it awakened. Sukunaoni’s spirit confronted them, mocking them and telling them they couldn't stop him from awakening. His dismembered limbs receded back into the mountain, where they combined back together to resurrect the demon! Sukunaoni quickly attacked GUTS with his Nitro Beam, but they managed to evade his fire and return fire, but didn't even hurt him. The demon quickly used his second face to blind and nearly down Rena but she managed to keep her GUTS Wing in the air. The samurai told Daigo that it was his turn to face the demon and he transformed into Ultraman Tiga.

Tiga quickly attacked the demon, who fought back with martial arts but was flipped overhead but landed on his feet and fired with his Nitro Beam. While Tiga managed to get behind him and attack, the demon warrior’s second face blasted him with his white smoke, stunning him long enough for Sukunaoni to plunge his fist into the mountain and unsheathe his ancient blade. Sukunaoni quickly attacked Tiga with the blade but Tiga managed to fight back, forcing the oni to play dirty. He put his sword behind his back, then took Tiga off guard by driving the hilt into his gut before tripping him with the sword. Tiga could barely stay out of the way of the blade and Sukunaoni began to beat down Tiga with martial arts and the hilt of his sword. But as Sukunaoni charged in for the finishing blow, Tiga used the Ultra Singled Outtakes and caught the oni's sword. The Tiga Slicer had sliced through Sukunaoni's sword and neck so quickly that the demon had appeared unharmed until his sword fell in half and then his head toppled from his shoulders.

The oni's body dissolved into flames but the monster's head suddenly launched from the ground and sank his teeth into Tiga's shoulder, biting so hard that Tiga's Color Timer started blinking and he couldn't remove the demon. But as Sukunaoni's victory seemed at hand, his ancient enemy, the samurai, sent his katana flying through the air and into the oni’s head. Sukunaoni bellowed in pain as the holy energies contained in the blade surged through his head, obliterating the demon and ending his reign of terror once and for all. Following the fight, the samurai could finally rest in peace, granting his title as guardian of Japan to Ultraman Tiga. 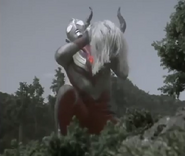 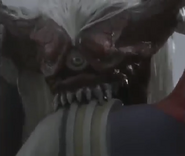 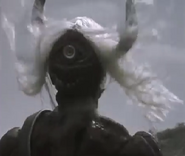 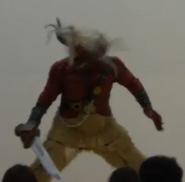 Sukunaoni in a stage show