When the monster Tarbo distracted the D-Force, Ururu sent a second soldier, Sugora, to attack Tokyo. After Tarbo was sent into retreat, Sugora fought the Super Izenbo, getting drilled through the shoulder and out the throat. The monster exploded in a rain of flesh. 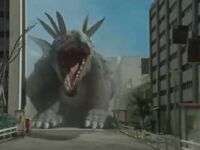 Add a photo to this gallery
Retrieved from "https://ultra.fandom.com/wiki/Sugora?oldid=512759"
Community content is available under CC-BY-SA unless otherwise noted.