Landing in the Antarctic ocean, Sufume created a crisis at Ice Castle, a facility meant to keep the waters cool to combat the effects of Global Warming. This calamy meant that Super GUTS would be sent to investigate and deal with the issue. Super GUTS then arrived in their Clarkov NF-3000 and began the rescue mission by descending into the ocean. However, Sufume captured the Clarkov NF-3000, dragging into the ocean depths and hijacking its computer systems. This allowed it to control its true objective the Man-Made sun NSP Campanella calling it to Earth, the South Pole specifically to melt the ice caps and flood the planet. Sufume also opened many hatches and sent his Digons in to finish Super GUTS. Asuka had gone to access a weapons port, to free the Clarkov but was isolated with Digons and attacked. Overpowered he then transformed into Dyna, beating of his attackers then teleported to deal with Sufume. As he rushed in, his attack was halted by Sufume's monster servent Reicubas. Their engagement moved from the ocean depeths to the surface, where the monster succeeded in freezing Dyna on Antarctica. However, Sufume's victory would be short lived as Reicubas was soon tricked into freeing Dyna and was then destroyed. Sufume himself was then wounded by Mai in the GUTS Marine. Sufume used his jet repulsion to flee Earth but was caught up by Dyna in Miracle Type, who restored the Man-Made Sun to its original position and killed Sufume by shooting light towards the Man-Made Sun, which enhanced and reflected the light, striking Sufume and obliterating it. 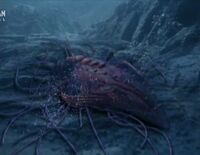 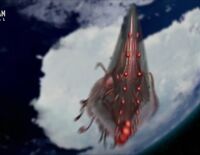 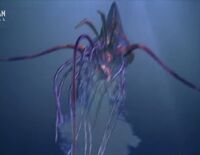 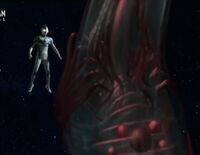