Alien Bell (in his dimension only)

Neo Ultra Q episode 6 "The Extremely Smelly Island"
Suflan (スフラン Sufuran) is a species of blood drinking plants on Tatara Island and Johnson Island. The plants seemed to be recreated by Alien Bell to inhabit his dimension.

One of the residents of the Tatara Island, the Suflan were responsible for the death of one member of a small group of Japanese scientists. With their disappearance, the Science Patrol arrived to attempt a rescue, but upon finding the bloody clothes of one of the missing men, the group was attacked. Numerous vines lashed out and grabbed Fuji and Ide. However, the plants were easily dealt with by Arashi's Spider Shot. As the patrol moved back, more vines began to dangle from the canopy, moving lazily as their human prey escaped without harm.

Elsewhere in the world, the carnivorous vines thrived. While locating the beast Gomora on Johnson Island, the group of scientists was attacked by the vines. Using his Spider Shot, Arashi managed to burn the plants, freeing the trapped scientists.

The Suflan reappeared in this series as plants created by Alien Bell. However, they are only referred to as "Suflan", with their true name being Space Plant (宇宙植物 Uchū Shokubutsu).

Created by Alien Bell to inhabit his Dimension X, the Suflan thrived there and caught two Ultra Guard members when they were trapped there. However, the plants were burned away by the UG Standard Uniform Pistols.

Suflan (or a plant like it) can be seen on the island Yuki is stranded on. Unlike its other appearances, it did not attack.

The Suflan reappeared in episodes 11 and 12 of this series in the section: "The Secret of Suflan Island". 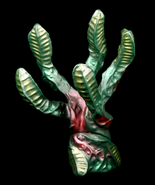 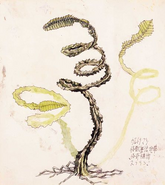