None
Sudar (スダール Sudāru) is a giant octopus that appeared in episode 23 of Ultra Q.

Sudar was a gigantic, man-eating octopus thriving in the South Sea, Sudar made its claim on the waters. It attacked a passing fishing boat, sinking the ship and leaving just one survivor. Hearing of the attack, Jun and the others arrive looking for scoop, but they find much more. As they visit Compass Island, where the survivor was discovered, the octopus crawled ashore. It chased after a young boy, trying to ensnare the boy with its tentacles. Thankfully the boy was rescued by one of the newsmen, denying the octopus its food.

The creature retreated back into the depths, but a sudden depth bomb attack would stir its vengeance! Enraged, the octopus crawled ashore once more, using its lengthy tentacles to catch the stunned natives, ignoring the bullets and spears thrown against it. When Jun managed to impale its head with two spears, the creature turned away again, heading for the water. With humans following, Sudar's body suddenly collapsed, the spears Jun threw having hit something vital. The octopus was killed, leaving the South Sea in peace. 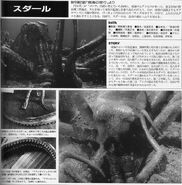 A pair of Ragon defending their eggs from Sudar. 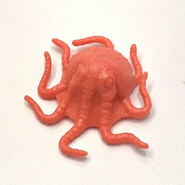