"Now is the time to unite!"

"The power of the Ultra Brothers: As one!"

Accessible only through Taro's bond with Ginga.
Strium Brace (ストリウムブレス Sutoriumu Buresu) is a bracelet that is used by Ultraman Ginga in Ultraman Ginga S.

When Ultraman Taro was on his way to Earth after detecting a new threat, he had been granted the powers of the five senior members of the Ultra Brothers in the Land of Light. Upon arrival, he transformed himself into a Spark Doll and later into the Strium Brace which enabled Ultraman Ginga to assume Strium form.

The bracer was seen in use as both Hikaru and Ginga. In order to keep Taro's appearance a secret from the rest of the UPG, both Hikaru and Tomoya lied about it as his new creation to Hikaru, a watch/alarm clock.

After Ginga and Victory destroyed Vict Lugiel (the revived Dark Lugiel), Taro bid them farewell and departed back to his world. It is also presumed that he had gave back the other five Ultra Brothers' powers back to their owners. 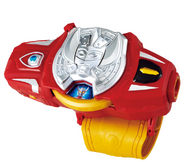 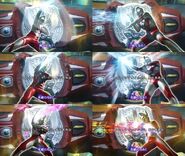 6 out of 13 demonstrated powers of the Strium Brace in the series' opening.