Stegosaurus is a dinosaur that appears in Dinosaur Squadron Koseidon.

Stegosaurus is seen foraging plants. A little girl drops her dead mom's ring, and the dinosaur accidently eats it along with plants. Later, Alien Godmes attack, causing the dinosaur to die. Later, the Koseidon Corps get a report from their boss in the 21st century, telling that a peculiar fossil of a stegosaurus that had a ring in it. It is revealed it was the girl's ring. There were a several of them living in a Dinosaur Research Center, until Alien Godmes came to kill them so they can release their new monster: Sigma-1. Much later in the series, Alien Holosto calls many dinosaurs to a machine they made to lure them in for mind controlling, and a Stegosaurus was one of them. 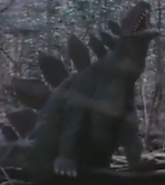