Fireman episode 9 "A Challenge from the Deep Sea"

Stegorus (ステゴラス Sutegorasu) is a mutated stegosaurus-like monster Fireman fought in the third episode of the TV series Fireman, appearing in episodes 3, 4 and 9.

Stegorus was a type of Stegosaur that had become mutated by radiation but lived in peace in the depths of the sea. One day, Stegorus woke up to seek food. An Alien Meteor duo saw Stegorus and decided to mind control it by using two antennae that had were lodged into the monster's head. Stegorus, now mind-controlled, began to attack villages and bridges making him a no longer peaceful animal but a violent brute! Stegorus attacked the JMSDF with its flames. Then one of its targets was Daiskue riding the SAF plane and crash-landed forcing him to turn into Fireman to fight the Stegorus as the dinosaur's flames empowered him! Fireman got up and fought Stegorus. Fireman seemed to have the upper hand but Stegorus' tail choked Fireman and then Stegorus' electric plates left Fireman at a weakened stance! Ultimately at last chance Fireman used his Fire Cross to send Stegorus back into the sea for recovery. The Mysterious Spaceship

For several days, Stegorus was asleep until the Alien Meteor controlled the stegosaur and woke Stegorus up. SAF set up missiles in case Stegorus was still hostile. As Daiskue had no idea where the last Alien Meteor was, he had no choice but to turn into Fireman to fight of Stegorus. Fireman got Stegorus in a headlock and chopped the mind control antennas off! On accident, SAF sent a radioactive nodule sent to the now peaceful Stegorus making the stegosaur get shot by the SAF missiles. Fireman protected Stegorus until the last Alien Meteor killed Stegorus. Fireman was saddened and left the Stegorus at the ocean. Fireman as Daiskue told the SAF captain not to interrupt the dead Stegorus' peace. The SAF team left a memorial for the peaceful dinosaur leaving Stegorus deep in their hearts. Destroy the Invaders

A second Stegorus appeared and was killed by the monster Nerogiras, its head ripped from its body. This could also be the dead body of Stegorus which was buried deep in the ocean. A Challenge from the Deep Sea 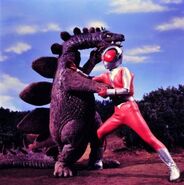