Stegon (ステゴン, Stegon) is a revived dinosaur skeleton from the series Return of Ultraman. He appeared in episode 10.

An ancient skeletal sauropod dinosaur, Stegon was in suspended animation beneath the ground of Japan. One day a construction crew managed to awaken it, much to the delight of a group of children. After spewing small amount of acid on one of the workers Stegon arose from one of the hills. MAT was quick to respond to the scene, but their attacks did little beyond annoying Stegon. Go turned into Ultraman Jack and began to tackle the skeletal sauropod. While try as the ancient reptile did Stegon was of little match for Jack in hand to hand combat. Before Jack could finish Stegon off some near by children were yelling out to him not to kill Stegon. Jack simply used his paralysis beam, lifted Stegon, and turned his body into a constellation of stars just like the original Ultraman did with Gavadon four years earlier. The children were happy and MAT then left. 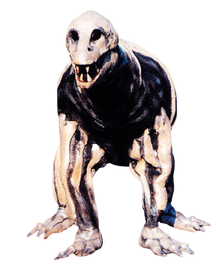 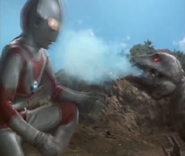 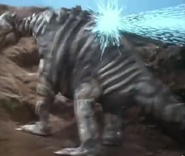 Stegon first appeared in episode 47, where he appeared by teleported behind Gronken and Zaurs, indicating that all three of them decided to work together to kill Redman, but only one at a time. After the other two failed miserably to kill the alien hero, Stegon worked up the nerve to get his kicks but, just the others, he didn't stand a chance against Redman. After gettting pummeled and thrown around, Stegon eventually gave in to a harsh throw to the ground and died.

Stegon reappeared in episode 49, where he teamed up with Gronken again to fight Redman in the howling winds. However, the monsters still couldn't get the upper hand on Redman, even though they succeeded a couple of times, and he even tricked them into knocking into each other. Stegon was then defeated with a harsh judo throw to the ground, with Gronken following afterwards.

Stegon's final appearance was in episode 50, where he fought Kingstron at first, and won, killing him in the process. When he was spotted by Redman, he climbed up the mountain to avoid fighting him but the hero dragged him back down and they fought nonetheless. After a surprisingly evened out fight, Stegon tried to escape by climbing up the mountain again, but, even after he had some difficulty, Redman managed to catch up to the monster and killed him by throwing him back down, resulting in his death.

Figure of Stegon, by Bullmark. 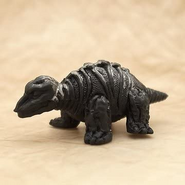 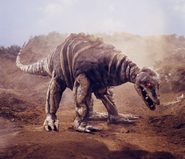 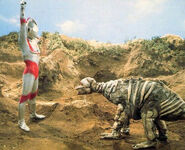 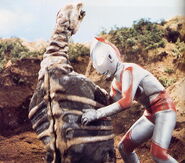 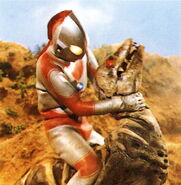 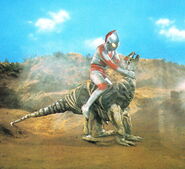 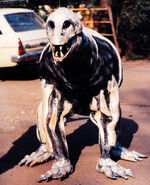 Stegon looking over eggs in an Ultraman Attraction.