"Well done, Stealgun, you'll be my subject, and they can atone for their sin..."

"It can fly as it wishes, emits a shock wave from its wings and shoot a destruction beam from the mouth. Okay, this is perfect for now. As long as we have Stealgun, we'll be fine even though Gridman gets in our way."

After watching the news on the phone connection system being hacked, one of the news reporters, Mr. Honosono, mentions about a computerized car that he owns and how whoever hacked the phones isn’t smart enough to hack the car. Watching this, Takeshi feels humiliated by the remark and decides to show that he can indeed hack in the computerized car. Using a satellite, Takeshi manages to hack into the car through it’s automobile telephone number. To make the news reporter pay for the insult, Takeshi creates an animated sprite of a winged creature and Kahn Digifer brings it to life, giving birth to Stealgun. Stealgun is sent to the computerized car at the time where Mr. Honosono and Soichiro were driving toward a game of golf. Stealgun starts to destroy the car’s computer system with the shockwaves from it’s wings and causes the car itself to drive wildly. With Mr. Honosono and Soichiro in trouble, Gridman calls for Naoto. Upon arriving at Junk, Naoto merges with Gridman and they head toward the car’s computer system. Gridman immediately fights against Stealgun, but quickly finds out that the Kaiju has invisibility, making it hard for him to fight back. After Yuka tries to find a program that will help Gridman and she sends him a painting program that would disable Stealgun’s invisibility. Upon locating Stealgun, Gridman uses the paint program on the Kaiju and continues fighting with it. Stealgun tries to fly up, but Gridman grabs the Kaiju and swings it the other direction. With it’s back turned, Gridman blasts Stealgun's wings off, crippling the Kaiju to the ground. Finally Gridman uses Grid Beam to delete Stealgun and fixes the car’s computer system with Fixer Beam. A Runaway Car

Stealgun's data was later upgraded into Mecha Stealgun (メカステルガン Meka Suterugan), Takeshi entered a CGI art contest, but was angered by the judge's commentary. Mecha Stealgun went into the judge's CG art company and stole the color from all the artwork and then began to steal the color from the city. Ippei had finished the King Jet, which was sent to aide Gridman along with Dyna Fighter. By combining the laser attacks of both vehicles, Mecha Stealgun's invisibility was disabled and was destroyed by Gridman's Grid Beam. Colors Disappear From the Planet of Earth 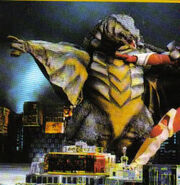 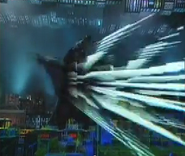 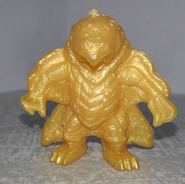