TBA
The Star of Darkness (暗黒の星 Anokoku no Hoshi) is an alien terrorist organization that seeks to conquer Earth on the belief that the strongest species should have it.

It is unknown how long Star of Darkness has been around, but presumably sometime after Earth joined the Star Cluster Alliance.

Since then, the elitist among the alien population grew resentful of having to stay within the 'City' and formed the organization to take the Earth by Force, even brazenly calling themselves 'Invaders'.

The group started their activities in New York by distributing drugs that turned people into superhumans, but at the cost of their humanity, instead acting on their instincts. This was all an experiment to prove their hypothesis of humans being backward, primitive beings who should not rule the planet.

The Star of Darkness made themselves known to humanity by hijacking all the screens in New York, announcing their plans to take over the Earth. The leader announced that their drugs had been spread throughout the city, causing mass hysteria and chaos as nobody would be held accountable for their actions while under the drug's influence. However, they later announced that what they said earlier was a lie, and had proven that humanity was unworthy to rule the Earth.

They started their plan to dominate Earth by sending their footsoldiers, but the Ultramen and their allies had arrived to stop them. Arriving in the city in person, the group then summoned the Golden Fortress, but it was destroyed by Moroboshi. The terrorists then faced off against them and were defeated. Driven into a corner, the leader consumed a deadly dose of the drugs to become superpowered, but was also defeated by Shinjiro, Shin and Bemular, but revealed that there was a mole among them. 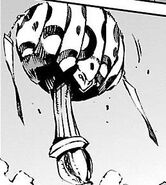