Star Bem Gyeron (ギエロン星獣 Gieron Seijū) is a birdlike alien Kaiju that first appeared in the series, Ultraseven. He appeared in episode 26.

Star Bem Gyeron was an alien who lived alone on a planet which shared his name. The beast became a victim of the UG's experimentation on a new rocket that destroyed his homeworld. The Gyeron monster pursued the rocket's origin and left for Earth to destroy it out of vengeance for the destruction of his homeworld. The Ultra Guard quickly picked up on the monster's presence and tried to stop the monster while battling it in space, but the beast's reflective body parts allowed him to resist their efforts. Shortly after landing on Earth however, the Ultra Guard was able to corner the monster and using a series of bombs, the monster from Gyeron was blown to pieces by their bombs. Later that night however, the chunks that made up the monster's body reformed back together and it was revived, to which he flew off into the night.

The next day, the monster was found in an open field by the Ultra Guard. This time however the monster resisted their weapons and downed their jets with a combination of his radioactive mist and his energy rings. Once the Ultra Guard was taken down, Dan transformed into Ultraseven to battle the alien monster. Star Bem Gyeron proved to be a challenge for the Ultra by using his arms to reflect Ultraseven's Eye Slugger multiple times, and using his energy rings to damage his right arm. Ultraseven continued to fight back and by absorbing enough sunlight with his Protectors, Ultraseven was able to gain a boost in strength, allowing him to overcome Gyeron's nigh-unbreakable armor. He then tore off the monster's right arm and slit the monster's throat with the Eye Slugger, agonizingly killing the creature from the dead planet Gyeron. 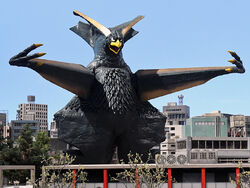 Star Bem Gyeron first appeared in Hoshiyama at exactly 10:00 AM and immediately found himself fighting against Ultraman Geed in his Primitive form. During their fight, even though Geed showed signs of being tired, he managed to hold even ground against the kaiju. After Gyeron exhaled radioactive gas on Geed, the latter transformed into his Royal Megamaster form and quickly destroyed him with his Swing Sparkle. However, this was only the fifth time in a row that Star Bem Gyeron was destroyed.

During the first time the Kaiju did appear in the city, Geed was introduced the Kaiju and during their first fight, Geed exclaimed in pain from trying to chop off Gyeron's armored wings but managed to hold his own against the kaiju. He then transformed into his Acro Smasher form, calmed him down with his Smash Moon Healing, and let him fly away. The second time he appeared, Gyeron went up against Geed in his Solid Burning form after the latter prevented the former from attacking with his Beam Coil and after hitting him a few times on his wings, Geed tossed Gyeron and destroyed him with his Strike Boost. On Gyeron's third attempt, he went up against Geed in his Royal-Mega Master form in a short, losing battle and was destroyed again, this time by his Vulcan Sparkle. On the fourth time, Ultraman Zero took the role of the hero and took on Gyeron in his Beyond form. He tossed Gyeron into the sky, only for Gyeron to use his wings to fly and attack Zero aerially. Zero used his Quattro Sluggers on the kaiju, but they reflected back to him, and so Zero ended up destroying Gyeron with his Balkey Chorus.

Afterwards, Riku Asakura, Laiha Toba, and Moa Aizaki discovered that every day, Gyeron somehow regenerated from being blown to bits every time he was seemingly destroyed. They tried to collect the kaiju's remains so they can get rid of them, but right before 10:00 AM again, the pieces evaporated and reformed into Gyeron once again. That round up to the fight that resulted in Geed using his Swing Sparkle on the kaiju. Thanks to Mayu, however, Moa figured out why Gyeron kept regenerating: the Kaiju had a relatively high amount of body fluid resulting from its planet's extremely high surface temperature and when it got frozen, it's biological activity shut down, and when it does, it can't turn into vapor and reform.

The sixth day then came and Gyeron reappeared once again and Riku once again transformed into Geed to fight him once again. Due to his experience fighting the same kaiju, Geed held the upper hand over Gyeron, but the Kaiju turned the tide in his favor later on, but Geed once again transformed into his Royal Megamaster form and quickly regained the upper hand, with Zero Beyond shortly appearing afterwards as he set up a barrier dome in a 1 km area where the two were fighting. Geed then used the Ultraseven Ultra Capsule in conjugation with his King Sword to fire the Slugger Shot at Star Bem Gyeron, which destroyed him again, and this time, to make sure he doesn't regenerate again, Riku, Laiha, Moa, and Leito Igaguri made sure to collect up the kaiju's frozen remains with help from the citizens of Hoshiyama. Afterwards, the AIB transported them all throughout the universe and kept permanently frozen, finally ending Star Bem Gyeron's reign of terror on Earth. Surprisingly, Kei Fukuide was seen with the kaiju's Kaiju Capsule as it was hinted that he used Gyeron to test Geed's capabilities. The 10:00 AM Monster Bird 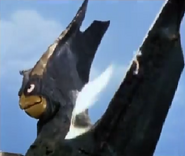 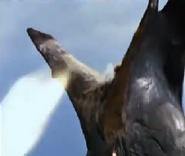 Star Bem Gyeron appears as an artificial kaiju, built by former Kato Corporation engineer Professor Nikaido to perpetuate a conspiracy theory that kaiju are an international hoax perpetuated by the USP to allow world governments to impose greater control over their citizens. It found its way into the hands of a gang in Auckland, New Zealand that proceeded to kidnap Dan Moroboshi and interrogated him over how the USP created kaiju. When Shin Hayata and Kiki Fuji snuck into their nightclub hideout to rescue Dan and Hayata transformed into a human sized Ultraman to protect them both from gunfire, Gyeron was activated and burst through the wall to attack. After being mostly destroyed, Ultraman used the limited time remaining to fly outside and throw its unstable power core into the sky to explode safely. 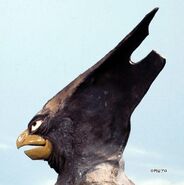 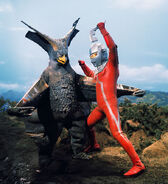 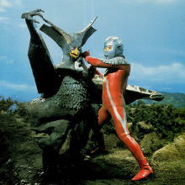 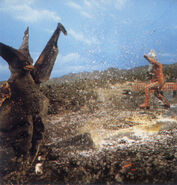 Gyeron frolicking in the night 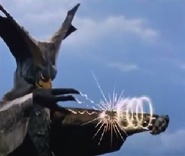 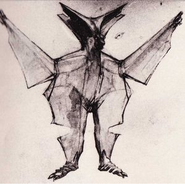 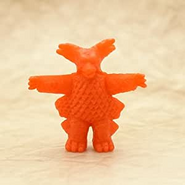