None
Spittle (スピットル Supittoru) is a Kaiju which first appeared in Ultraman Cosmos episode 3 "Fly! Musashi".

A large creature from beneath the Earth, Spittle scouted the surface in the middle of the night and returned the next morning near an active airport. EYES quickly came to the scene and placed a tracking device on him. After some of Spittle's slime got into one of EYES' fighters, the monster quickly burrowed underground. That night Musashi Haruno tried to analyze whatever possible weaknesses Spittle might have and soon found out that he was protecting an egg beneath the ground. Spittle was spotted the next morning about to attack the airport with EYES soon coming to the scene to stop him. However, a jumbo jet with a smoking right wing as about to make a crash landing nearby and Spittle aimed straight for it. However, thanks to Musashi's quick thinking, he distracted Spittle long enough for the jet to land safely.

Once the jumbo jet landed safely Spittle started to become more aggressive and used his no longer ranging slime stream to shoot Musashi down. However, he quickly turned into Ultraman Cosmos and did battle with Spittle. Try as Spittle might, Cosmos was too maneuverable for him too handle. Once Cosmos used the Moonlight Barrier to stun Spittle, EYES used a special tranquilizer on his the sensitive spot on the back of his neck to put him to sleep.

Slime Stream
Add a photo to this gallery 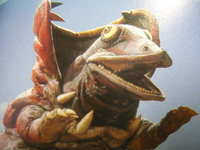 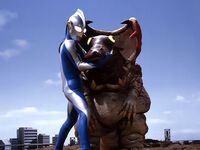 Ultraman Cosmos vs Spittle
Add a photo to this gallery
Retrieved from "https://ultra.fandom.com/wiki/Spittle?oldid=538726"
Community content is available under CC-BY-SA unless otherwise noted.