Itaruyo Hisako
The Spheres[3] (スフィア Sufia) are the main antagonists of Ultraman Dyna and Ultraman Decker.[4][5] They are a hive mind of life forms from space that attack planets with life, seeking to assimilate them to bring "peace".

Sphere first appeared when Training Squad ZERO were having their first outer space training, in which Asuka got the highest score and successfully tagged Kariya and Ryo. The Spheres then proceeded to attack the minor auto-pilot station that they were around and were later driven away. However, they gunned down Asuka's GUTS Wing 1 and had Asuka meet the mysterious light while in space.

While the Spheres began to hail an assault on the TPC Mars Base, they fuse themselves with a Mars mineral which formed Darambia and walked through its way to the base until a new Ultra that would later named as Dyna emerge and fought Darambia. Later, the Ultra and Super GUTS forces battle them until a remaining one left, merging into Giralen and make its way to Super GUTS base until the Ultra vanquished it with his Revolium Wave.

The Spheres, however, absent throughout the rest series until they made their return in episode 35 and near the end of the series where they would be responsible for the creation of synthetic beasts such as Neo Gaigareid, Geomos, Graikis, and finally Zeluganoid after fusing with TPC's artificial Ultra, Terranoid.

After Zeluganoid was destroyed, the Spheres left and rejoined with the Gran-Sphere (グランスフィア Guransufia), which devoured several planets in the Solar System. Meanwhile, Super GUTS developed a campaign (Battle Against Spheres (BAS) Campaign) and Ryo flies Asuka home after finding him rescued by Daigo Madoka. During the battle at Saturn, the Neo-Maxima Cannon was used to destroy Gran-Sphere's most powerful monster: Neo Gaigeried. However, the cannon was not powerful enough to kill Gran-Sphere and Saturn was lost. A final effort was made to kill Gran-Sphere at Mars. After the battle (read the Shin Asuka article for more on the BAS Campaign), Gran-Sphere was destroyed. But her death would bring a wormhole of a gap between dimensions to existence. After Dyna was sucked into it, her victims were released and the another wormhole opened, to the Land of Light.

Several surviving Spheres existed after the defeat of Gran-Sphere and attacked the TPC Mars Base again as they have done in the first episode of Dyna, only to be driven off by Super GUTS. However, during the raid, several were captured by an Alien Bat and later fed to the developing Hyper Zetton, Hyper Zetton (Gigant), in a form that is rather gruesome; having Gigant Zetton's spikes penetrate the Spheres completely before dragging them in for feeding.

Later in the final battle between Hyper Zetton and Ultraman Saga, the absorbed Spheres were released to awaken the modified Kaiju that Alien Bat created. Ultraman Saga

After a period of peace, the Spheres attack the Earth that Ultraman Trigger once defended, cutting off the planet from the rest of space. This forces the TPU to reorganize GUTS-Select into an Anti-Sphere unit to combat them.[4][5]

When a Sphere merges with a mineral or a life form, it will result in the creation of artificial monsters. In the case of assimilated life forms, they will become obedient to the will of the Spheres. Their common abilities are generating barriers and evolving into Super Synthetic Beasts. 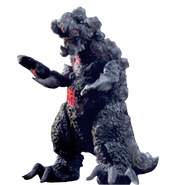 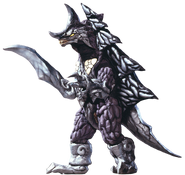 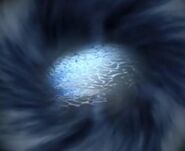