Mirrorman episode 20 "Bodyguard from the Deep"

Mirror Fight episode 35
Sphenodon (スフェノドン Spenodun) was a Kaiju that appeared in the TV series, Mirrorman. He appeared in episode 20.

Sphenodon was a large kind of lizard that was supposed to be extinct seventy million years ago. In the present day, a single member manipulated by the Invaders was causing destruction at Sagami Bay, sinking seven ships that were in the area. Kyotaro investigated and witnessed a disgruntled man with a shotgun get attacked by Sphenodon. After saving the man, Kyotaro alerted SGM to the situation. Dr. Mitarai quickly identified Sphenodon after seeing one of Kyotaro's pictures. SGM decided to hunt for the giant lizard via submarine soon after. Upon further investigation with the disgruntled man, named Sakagami, he revealed to Dr. Mitarai that he had seen Sphenodon eat narcotic cacti before ships started sinking in Sagami Bay. The violent behavior was realized to be withdraw symptoms and was part of a plan the Invaders were plotting. Meanwhile, the SGM used their submarine, the Pacific, to find an undersea base created by the Invaders when Sphenodon attacked them. The Pacific fired a pair of rocket torpedoes to no avail as the vehicle was smacked down with one swipe of the giant lizard's right hand.

After learning the situation, Dr. Mitari concluded that Sphenodon was used as a bodyguard for the Invaders' undersea base. During this, Sakagami and Kyotaro go into the desert of narcotic cacti to investigate, soon finding the giant lizard walking around. Sakagami fires his shotgun at it only to get swiped by the monster's tail. The Self Defense Force sent fighter jets on Sphenodon only for him to easily destroy them. Kyotaro transformed into Mirrorman using Sakagami's shotgun to fight the giant lizard. The giants clashed, starting their fight with shoves and punches. Mirrorman was flipped over in a failed attempt to use a pile driver on Sphenodon, allowing him to bash the hero with his tail. After that Mirrorman threw Sphenodon by grabbing him the tail and killed him using the Silver Cross.

Sphenodon appeared in episode 35 of Mirror Fight. Stock footage of his fight in Mirrorman was reused in this series. 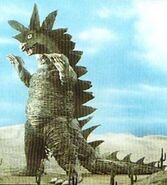 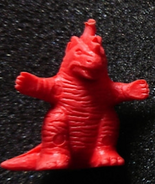