Fireman episode 29 "Don't Shoot! Even Though he's a Monster, he's Still my Friend"

Spegz was a carnivorous space monster that came to Planet Earth millions of years ago to settle down. Her child, Spegz Jr. had been used by SAT in an experiment. It escaped from SAT, but was killed by some factory employees with a hunting rifle, causing Spegz to rampage in anger. SAF started an attack, but Spegz downed Daisuke Misaki's plane with her toxic smoke. Misaki transformed into Fireman and battled Spegz. Fireman fought well until Spegz used her toxic smoke, choking him. Fireman recovered and attacked Spegz with a flying kick. He then impaled her with the Fire Jack and blew up her head using the Fire Flash. Don't Shoot! Even Though he's a Monster, he's Still my Friend 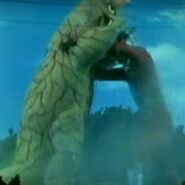 Spegz impaled with the Fire Jack 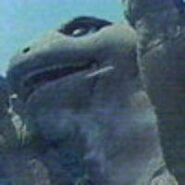