The world behind the mirrors

Ultraman Leo episode 37 "Mystery! The Mirror in Which the Devil Lives"

None
Specter (スペクター Supekutā) was a Kaiju that appeared in Ultraman Leo.

A monster belonged to Alien Mazaras, she called Specter as the monster chased Gen and buried the man in sands after knowing that the man would interfere her plans. Alien Mazaras summon Specter again to kill Gan and Kaoru. The monster chased the two but Gen realised that Specter was being controlled by Mazaras via her hand mirror. He fired the mirror and took possession of it but instead, this made Specter went to the real world and set on a rampage. After escaped from the other world, he brawled Specter. After dodging several of the monster's beams, Ultraman Leo finally killed Specter with Hand Slicer, resulting it crumbled into mirror shards. 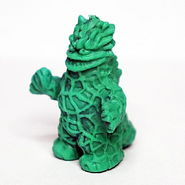 A Specter eraser
Community content is available under CC-BY-SA unless otherwise noted.
Advertisement