This article contains a list of released Sparklence toys.

The DX Sparklence is a role-play toy that is based on the transformation item of the same name. Pressing the button activates the transformation feature while it triggers the (non-accurate) transforming sound. The "wings" must be manually closed.

Released to conclude the premiere of The Final Odyssey, the Black Sparklence is a recolor of the DX toy above. Aside from this, the electronics are identical to the original.

12 years later, the original DX Sparklence toy is reissued to conclude the release of Great Decisive Battle! The Super 8 Ultra Brothers. While the deco is the same as the original toy, the sound electronics are changed to be more accurate to the original transformation sound.

"Souten (translated as "Loaded", a term for adding magazines on a firearm) Triple Sound Ultraman Tiga" is a multipack that comes with the titular figure, and a Catridge-powered GUTS Hyper and Sparklence. The Ultraman Tiga figure can play at least 7 sound effects (4 grunting, 1 color timer sound + light-up, and flight) triggered by the infra-red signal transmitted from the Cartridge-equipped Sparklence, though the figure can play those sounds (except for the color timer feature) without the Sparklence. 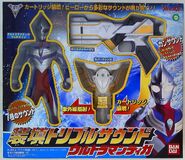 The second "Ultra Brothers Transformation Item Set" multi-pack comes with the Sparklence, Lieflasher, Esplender, Agulator, Leo Ring, and the Knight Brace. Unlike most of the role-play devices, the Sparklence is the only one that comes with its own electronic sound feature. 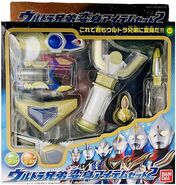 A smaller, Candy Toy-version of the Sparklence is available as part of the "Tranformation Item Hyper" line, released to conclude the premiere of the Great Decisive Battle! The Super 8 Ultra Brothers movie. Unlike most of the toys above, the "wings" are needed to be opened manually.

Packages with Ultraman Tiga and the transformation device contains the item.

The first Ultra Replica Sparklence is released as a PRC-exclusive set along with a redecoed Ultra Hero 500 Ultraman Tiga in Glitter Tiga's colors. Deco-wise, the marble effect on the handle has been removed.

One of the first Ultra Replicas to be revealed along with the Beta Capsule, this Sparklence is a prop-accurate role-play device compared to the DX toy. The item features a variety of light-and-sound features, including Tiga's mode changes. Idling the device for 10 seconds plays the Ultraman Ginga S The Movie version of the "The One Who Inherits The Light" music. While the transformation sound is based on the first few episodes where Daigo poses after he opens the Sparklence before raising it, it does not come with an additional sound feature where the Sparklence directly plays the transformation sound when the appendages are opened.

The Ultra Replica is exclusive to Premium Bandai, limited to 3000 pieces. This Sparklence is later reused for the PRC-exclusive "Glitter Tiga Special Set".

The Ultra Replica Sparklence also gets a black-themed redeco to resemble its appearance in The Final Odyssey. In comparison to the original device, the Black Sparklence features a new soundboard: Pressing it once plays Tiga Dark's transformation sound, twice for Darramb's attack, thrice for Hudra's attack, Tiga's Multi Type transformation sound in the forth time, and lastly Glitter Tiga's transformation sound if pressed for the fifth time. In Glitter Tiga's mode, pressing the button for a slightly long time activates the 18-second sample of the instrumental version of Brave Love, Tiga.

Like the original Ultra Replica Sparklence, the Black Sparklence is limited to 3000 pieces.

Released to commemorate the 25th anniversary of the Ultraman Tiga TV Series, This Ultra Replica Sparklence is retool of the original device, featuring new additional buttons and a new soundboard. The different sounds can be activated underneath the battery compartment, which also plays the pre-opening title sequence voice line. This Spacklence also features a motion detection feature which allows the owner to move the item with the motion SFX being played. Deco-wise, the marble effect is now changed with a more lighter purple hue.

Various sound effects and music can be activated in 3 different modes:

Switching into this mode activates a very short version of the Transformation sound followed by Evil Tiga's grunt.

Switching into this mode activates a short version of the "Ultraman Tiga Appears!" from Great Decisive Battle! The Super 8 Ultra Brothers.