This may not be the article you are looking for. For the Black Sparklence in Ultraman Trigger: New Generation Tiga, see GUTS Sparklence.

Active
The Sparklence[1] (スパークレンス Supākurensu) was Daigo Madoka's transformation item, used to transform into Ultraman Tiga. Later in the movies Ultraman Tiga: The Final Odyssey and Ultraman Tiga Gaiden: Revival of the Ancient Giant, other versions of the Sparklence appeared, bearing very different designs from each other and the original.

The Bronze Sparklence (青銅のスパークレンス Seidō no Supākurensu) was used by Daigo's ancient ancestor, Amui, to transform into Tiga without assimilating with the Tiga's statue. Whereas the other three were made of marble this one was made entirely of bronze with a red stone on the grip. The markings on the top that resembled Tiga's protector but were red and resembled tribal markings. The device worked the same way the normal Sparklence did, what became of it is unknown as well as its origins as it was just found in the mountains by a warrior who slew a monster. Its design and appearance imply that it is not the original Sparklence so this device remains riddled with mystery. Unlike Daigo's Sparklence which was gained by his merger with the Tiga Statue, Amui transformed by channeling the power of Tiga while the statue remained in the pyramid untouched.

Daigo gained the Sparklence immediately after merging with the Tiga statue, which appeared in his jacket after he transformed back. It is apparently his by default as the reincarnation of Tiga he was destined to receive it. The Sparklence is activated by pushing a button. At times, Daigo has transformed without it as he was under emotional stress or during a great fall, such as when he first transformed into living light and merged with the Tiga Statue. At the end of the series, the Sparklence disintegrated.

Tiga's former lover and leader of the Dark Giants possessed a Sparklence. It was used for the same purpose and activated by a similar method. In human form, Camearra transformed using a Sparklence with a gold handle, the wings were diamond-shaped with windows, and the inner object was diamond-shaped, as opposed to round. Even though it bore more resemblance to the Light version of the Sparklence, it shined with the same dark energy as the Black Sparklence.

In Ultraman X The Movie: Here He Comes! Our Ultraman, Alien Fanton Gourman created Ultraman Tiga's Cyber Card along with Ultraman's Cyber Card in Xio's lab, they were transferred to Mamoru Mikazuki and Rui Takada to be given to Ultraman X human host, Daichi Oozora. He scanned both Cyber Cards to receive the X Sparklence and the X Beta Capsule to form the Beta Spark which allowed Ultraman X to wear the Beta Spark Armor.

The original Sparklence (スパークレンス Supākurensu) was given to Daigo after his merger with Ultraman Tiga's statue. It is his transformation device in his series. There are currently two variations of the transformation sequence:

Daigo transforming via the Black Sparklence

Camearra uses a black and gold Sparklence device to transform from her human form to her Ultra form. Upon activation, the device opens and releases dark lightning bolts that surround the user and transform them into Camearra.

This device was found in ancient times and was used by both Tsubasa Madoka and Amui. The transformation sequence for this variant is exactly the same as the original's. 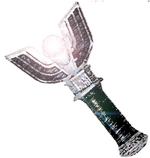 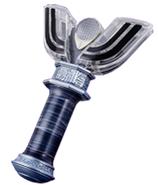 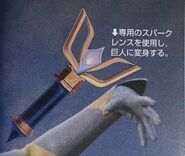