None
Spacer (スペーサー Supēsā) is a Kaiju that appears in the series, Fireman.

Spacer was a monster held by Planet Gomerus as the planet went rouge. Spacer was summoned from the underground of Gomerus at a time but went back in.

As Fireman went to rescue to the trapped SAF group, Spacer awoke and attacked Fireman! Spacer took a toll of Fireman with its toxic gas. Gomerus helped Spacer as its tentacles choked Fireman. Fireman then backfliped and destroyed Spacer with his Fire Flash. 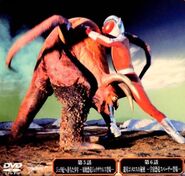 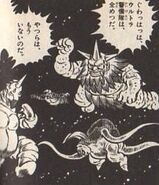