None
The Space Plant (宇宙植物 Uchū Shokubutsu) is a parasite organism that took over Tetsuon.

The Space Plant was a virus that the kid Tetsuo ate when it was in a seed after its UFO accidentally got knocked down by a baseball. At first, Tetsuo was happy that the parasite turning him into Tetsuon was a great improvement on his life, but when the consequences became severe, the kid couldn't take it anymore and begged for everything to be back to normal. Takeshi Yamato decided to transform into Ultraman 80 and he shrank himself into microscopic size and traveled into the monster-kid's stomach to fight the virus at hand. Both sides held their own against each other, making it an evenly matched fight. In the end, 80 defeated the monster by using his Succium Beam on him, resulting in his defeat and Tetsuon reverting back into a child. 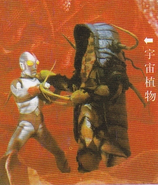