None
Space Mask (宇宙仮面 Uchū Kamen) was an alien and one of Yapool's agents in Ultraman Ace.

One day, Yapool grew furious after having almost all of his Terrible-Monsters becoming failures. He hired an alien named Space Mask and sent him to Earth. TAC at first dismissed his arrival, doubted it as a falling comet until an injured eyewitness reported that a figure arrived from the meteor and attacked the latter. At night, Space Mask infiltrated TAC headquarters but quickly chased by the officers and stowed motorcycle for escaping. While he was tailed by officers Yamanaka and Mikawa on a patrol car, Space Mask used his physic power to push their car into a nearby cliff. Yamanaka survived the fall but Mikawa died. Space Mask brought her lifeless body to a nearby hospital and revived her. Under his human alias Jiro Sakai (坂井 次郎 Sakai Jirō), Space Mask worked in an kindergarten and was visited by TAC a week later. Here, Sakai constructed the kids to create a Terrible-Monster sculpture. Sakai quietly injured Hokuto's leg with his physic power when the latter sensed something suspicious on him. TAC officers also felt something suspicious on Sakai, since he happened to be on the accident a week ago and wearing a same bracelet with the alien infiltrator. To further investigate, they sent Mikawa to give him a scanner disguised in a charm, all while unknowingly watched by the alien. Nonetheless, Sakai willingly let himself unmasked by TAC, brought Black Satan to life and ordered it to rampage through the city. Ultraman Ace and TAC were having a hard time battling it until Ace seemingly killed it, only for Space Mask to revive it again. It seemed as though Ace had finally met his match but soon Space Mask was shot off a building and killed by Mikawa. Black Satan would soon be destroyed by Ace after TAC killed Space Mask. 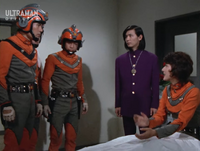 Retrieved from "https://ultra.fandom.com/wiki/Space_Mask?oldid=522578"
Community content is available under CC-BY-SA unless otherwise noted.