The Space Cats (宇宙化猫 Uchū Bakeneko) refer to a collective of cat-like aliens who first appeared in the TV series, Ultraman Max. One of their notable features is performing emoji-like expressions, as well as their species' ability to manipulate the function of memories in their opponents.

Kuro's name is the katakana spelling for the color black (黒 Kuro) in Japanese.

Mike (ミケ, Mike), Kuro (クロ, Kuro), and Tama (タマ, Tama) first arrived on Earth as tiny meteors and have existed on Earth for a month. Within a week, the trio began emitting their Memory Waves across Japan, causing several people to suffer from amnesia. One day the first of the cat monsters, Mike, arose from the harbour in the vicinity of DASH's own HQ. DASH was sent to take care of the monster, but due to Mike's Memory Wave being right next to them, they immediate forgot how to pilot their jets or use their weapons. During the struggle to remember, one of DASH's jets flew into Mike and angered the monster into destroying it. Kaito unintentionally transformed into Ultraman Max, but being an organic lifeform, was also affected by Mike's Memory Waves and forgot how to fight or use his weapons. Even Mike was surprised by just how much Max had forgotten.

Mike quickly went on the offense when he was attacked again and damaged DASH's HQ directly, with nothing that DASH could do to stop him. Eventually during the chaos of everyone's memory loss, Kuro and Tama surfaced as well and joined Mike in attacking Ultraman Max directly with their energy bolts. Max managed to power out of their triple bolt attack and after receiving enough encouragement from Elly (DASH's non-organic android operator, who was immune to the monsters' memory waves), Max remembered enough of his past to know how to fight back and quickly killed all three monsters with his High Speed Rotation Beam attack.

Another space cat also appeared in Ultraman X, its name was first unknown, but Rui insisted on naming it Mu-chan as it kept saying Mu. So the space cat was officially named Mu (ムー Mū) by Xio. It appears alongside Red King.

In the past, Ultraman X once defended Mu against a monster named Dorako, causing her to fall deeply in love with X. But for some reason, Ultraman X has forgotten this experience since fighting with Daichi.

While looking for X, Mu crash landed on Earth at Area T-1. The monster's appearance caused temporal interference with the electricity and equipment in the town. Xio is sent to deal with her, but she went away almost as soon as they tried to stop her.

Rui and Mamoru bring the entire crew around to tell them that they hypothesize that Mu's appearance attracts an increase in Dark Thunder Energy strikes, causing Captain Kamiki to hypothesize that someone is controlling the the energy. Doctor Guruman then calls and tells them that the interferences are happening again resulting in Xio going into action again.

With the Dark Thunder Energy strike increase, even the Spark Dolls begin to react to this interference and the Sky Musketty's controls to spiral out of control. What's worse is that one of the Dark Thunder Energy strikes the ground, revealing Red King, but the monster's appearance frightens Mu and Daichi transforms into X to stop both of them. But as soon as the Ultra appears, Mu goes love crazy over him which leaves both X and Red King confused. X kept trying to avoid Mu and fight Red King but Mu was just too persistent despite X saying that he had never met her before. He fought Red King and he gained the upper hand at first.

Unfortunately, after Red King grabbed Mu and Dark Thunder Energy struck him again, transforming him into EX Red King which put both X and Mu in a tight spot. X eventually transforms into his Exceed X form to fight him. He used the Exceed X Slash to eliminate the Dark Thunder Energy from his body and turn him back into his normal form and used his Xanadium Beam, reducing Red King to a Spark Doll.

X then comforts Mu but she accidentally released her amnesia gas causing Asuna, Daichi and X to have amnesia and the Ultra (who has forgotten his memory) seeing that Mu was harmless but was causing temporal interference with the electricity, he threw Mu back into space. She came back soon afterwards after Hayato and Nanako meet again. When X insisted that Mu should leave due to her interferences, Mu began to cry. X remembered about the past, but Mu lost her memories. She flew off, leaving X confused when he wanted to talk with her. It was later assumed that Mu's tears has brought back X's memories but in exchange, Mu lost her own memories along with her love for X. 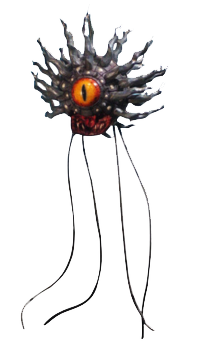 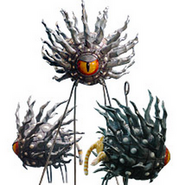 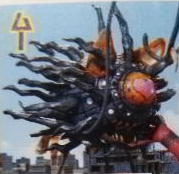 X sending Mu back to space.

Erasers based on Kuro, Mike and Tama