Planet Earth, in a Volcano in New Guinea

None
Sodom (ソドム Sodomu) is a Kaiju that first appeared in the TV series, Ultraman Dyna episode 21 "The 3000 Degree Heat Radiating Monster".

One day during the mysterious heat wave that hit the Super GUTS headquarters, it was suddenly discovered that the air conditioning vent was destroyed and must be repaired for the area to stay habitable. However, it was so hot within the building that the elevators were melted to the shafts and, according to Nakajima, "The head is enough to allow one to fry an egg on the windshield of the GUTS DIG." Asuka and Ryo were sent to repair the chute and found the monster Sodom to be resting there, enjoying the cold. Asuka opened fire on it and Sodom burrowed away above ground.

Sodom was soon recognized by Kariya and a battle plan was arranged: Continuously pound Sodom with water to destroy his heat. The plan was put to action the next day, but the water only managed to make Sodom superheat, enough to create a mirage of him in the air. Asuka transformed into Ultraman Dyna to combat the beast, but could not due to Sodom's heat. Finally, it was shown that Sodom was sneezing and it turned out that he had a cold. Dyna realizes this and uses the Ultra Physic to bring Sodom back into an extinct volcano, where his disease was magically cured and Dyna flew away, leaving Sodom to burrow away.

Though the Super GUTS headquarters finally has its air conditioner fixed, but as it cannot respond in sudden temperature changes, everyone were affected by cold.

Fireball
Add a photo to this gallery 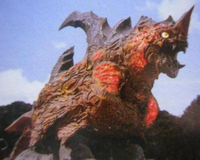 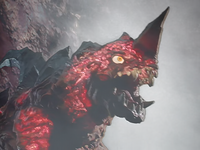 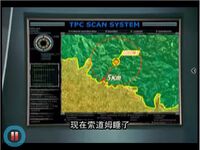 Sodom on a TPC Map 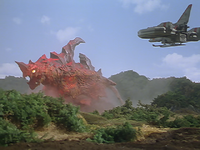 Add a photo to this gallery
Retrieved from "https://ultra.fandom.com/wiki/Sodom?oldid=512687"
Community content is available under CC-BY-SA unless otherwise noted.