Snowgon (スノーゴン Sunōgon) is a Kaiju from Planet Black in Return of Ultraman, she first appeared in episode 40.

A Kaiju from Alien Black's home planet, Snowgon was brought to Earth by the alien. Freezing people, mostly couples, the giant attracted MAT's attention. Once MAT found out where the aliens were hiding, Snowgon freezes the team while Oka is keeping Jiro and Yumiko company. When Go was a little active, he shot Snowgon, which was ordered to revealed her true form! When Go passed out unconsious, Ultraman Jack came out and took Go's place to fight the alien monster. Freezing Jack solid she began to brutally rip his head off. However, Jack's Ultra Bracelet brought him back together and revived him. Ultraman Jack used his Bracelet and turned it into the Ultra Defender so that he could block Snowgon's Ice Mist. The mist reflected of Jack's shield and froze the snow monster! Jack then tossed the monster to the ground and Snowgon then exploded. Winter of Horror Series - Phantom Snow Woman

Snowgon was seen in an animated flashback as part of the Monster Army in the Ultimate Wars lead by Alien Empera in episode 25 of Ultraman Taro. Burn On! The Six Ultra Brothers

Snowgon appeared in the second movie special. She was the eighth monster to be Ultlived by the Livepad and the second monster to be Ultlived by Misuzu Isurugi. She went up against Miclas and won thanks to her Frozen Snow Freezer but then vanished after being hit by Telesdon's flames. Ultraman Ginga Theater Special: Ultra Monster ☆ Hero Battle Royale!

In New Ultraman Retsuden episode 15, Ragon talks about Snowgon as well as her master, Alien Black, as her research topic. Snowgon appeared in Ultraman Ginga as a Spark Doll. Snowgon likely returned to space in her original form after Ultraman Ginga defeated Dark Lugiel.

Snowgon guest starred in episode 27 alongside fellow guest Pedan and mainstay host Mefilas. The trio visit the local region surrounding the Toden-Arakawa Line of Fukuoka and Saga. Unlike her fearsome first appearance, Snowgon here is presented as a friendly and upbeat person. However, like many of the series' various guest monsters, she is prone to sudden confrontational fits, ultimately leading into a street brawl with Pedan and Mefilas. Eventually all three stop fighting and quickly make up after Mefilas summons forth a dramatic truce.

The first known figure of Snowgon was released several times by Bullmark with a different paint job for each release. They all mostly share the same design and detail, with the first two releases being made in 1972 and the latest being as recent as 2011. All except for the 2000 release which featured more vibrant colors, including yellow and green, were painted with a combination of white, blue, and red, being somewhat but not completely show-accurate. The key differences being the distribution of each color (e.g., the 1972 releases featured more red while the 2011 release had more blue with darker colors). Each release has about five points of articulation and stands at approximately 8 inches in height.

More recently, in 2013, a figure of Snowgon was released by Bandai as a part of the Ultra Monster 500 series. The figure has two points of articulation and a show-accurate paint job. She is #30 in the series and stands at 5 inches in height. 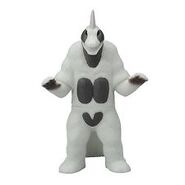 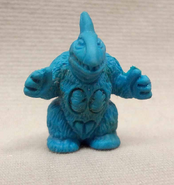 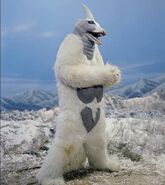 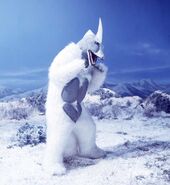 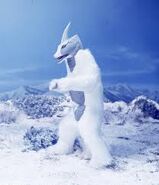 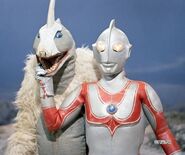 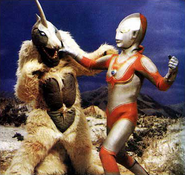 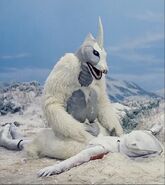 The original Snowgon suit in a public appearance

Snowgon with Alien Mefilas and Alien Pedan in ep 27 of Ultra Monster Walks.