Smoke Ness (スモークネス Smokiness) is a Kaiju introduced in Mirrorman.

Smoke Ness was sent down from space on one hot day to fill Ashi New Town with toxic gas. After he went underground the SGM investigated in the Jumbo Phoenix. Kyotaro wandered the area and notice on of the causalities was riding his bike in a dimensional loop. Smoke Ness returned to the surface after Kyotaro found a dead family in an apartment. The next time SGM investigated Ashi New Town everyone appeared alive and well, contradicting what Kyotaro saw and what Smoke Ness did. That night Kyotaro investigated further and discovered the Invaders all replaced the townspeople with fake masks. The Invaders destroyed Kyotaro's car to prevent his escape, forcing him to become Mirrorman using a streetlight. The hero attacked the town, forcing the Self Defense Force and SGM to attack him not knowing what was going on.

The battle alerted Smoke Ness who decided to burst from the ground ready to fight. SGM focused on the monster, but his defenses were too strong for their missiles to penetrate. Smoke Ness then charged at the hero, but Mirrorman retaliated by using the Mirror Knife to the back of his head, severing his shell. Smoke Ness launched his hands at Mirrorman who managed to throw them into a transformer. The hero dominated the fight with a series of throws and kicks until his color timer went off to alert him of the energy time bomb. The weakened Mirrorman managed to kill Smoke Ness with the Miracle Kick, decapitating the monster. 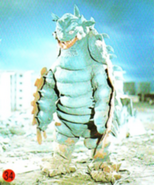