Ultraman episode 34 "Present from the Sky"

Skydon's name is a combination of the words "Sky" and "Dawn," Dawn because of Skydon's first arrival at the crack of dawn. Other interpretations claim that Skydon's name is actually a combination of "Sky" and "Down", as Skydon dropped down from the sky but yet another interpretation claims that the "Don" suffix alludes to the monster's resemblance to quadrupedal dinosaurs.

Skydon is a monster from space that landed on Earth in a meteor. Landing in a small construction site, a grumpy Skydon immediately attacked and set the site on fire with his flames. The Science Patrol was quick on assault, but their weapons were uselessly shrugged off by Skydon with ease. With the site on fire, Skydon soon went to sleep.

With their first assault a botch, the Science Patrol went through a series of tactics to get rid of the monster, the likes of which included:

all of which failed comedically. During their first failed effort to get rid of the monster, Hayata narrowed avoided crashing and transformed into Ultraman to battle the beast, however much like the Science Patrol's follow-up of plans, Skydon easily shrugged off his assaults and went back to sleep, leaving a moderately embarrassed Ultraman to retreat once his Color Timer began to blink. Finally after a series of failures, the Science Patrol decided to fill the monster with hydrogen, inflating Skydon like a balloon, which miraculously succeeded.

Suddenly, the Air Force noticed Skydon and shot at the monster in mid-air causing Skydon to lose hydrogen and plummet dangerously into the heart of Tokyo. After comedically mistaking a spoon with the Beta Capsule for a second, Hayata transformed into Ultraman again and destroyed Skydon by using the Air Body technique on the Hydrogen-filled monster, destroying Skydon in a fiery explosion. 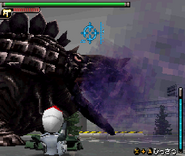 Skydon appeared in volume 4 of The Rise of Ultraman, where it was seen trapped in Limbo alongside other Kaiju. 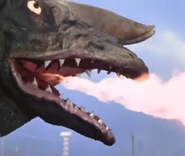 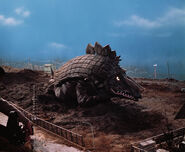 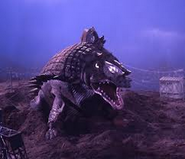 Being lifted by Gorian in Ultraman Story 0

Skydon in the Marvel Comics 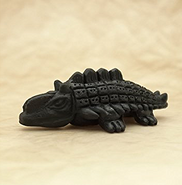