The☆Ultraman episode 30 "The Enormous Fossil Has Come to Life"

None
Skeldon (スケルドン, Skeldon) was a monster that appeared in The☆Ultraman.

Appearing out the side of a mountain one night was the skeleton of a giant carnivorous dinosaur that even caught the attention of the Science Guard Party. Within the course of a day the entire skeleton was removed from the mountain and taken to a local museum where it would be set on display. However, one night a security guard noticed that the unattached tailbones magically reattached themselves. With the body reconstructed, the monster Skeldon was reborn and began a rampage in Tokyo. Skeldon began to emit a toxic gas from its jaws, surrounding the city in a noxious vapor of death with the Science Guard Party planning on how to fight the monster. After missiles from one of their fighters blew the remains apart, Skeldon reformed in no time.

Kei attempted to use a bazooka at the monster's skull only to miss and nearly die from the fumes. Just as Pigu saved Kei, Skeldon surrounded its body with flames and took off like a comet. Skeldon managed to allude the Self Defense Force as it laid in a sewage pipe to rest. Skeldon appeared the next night with the Science Guard Party able to counter the toxic gas with a gas of their own. However, Skeldon managed to down their fighter, forcing Choichi to turn into Ultraman Joneus to stop the skeletal monster's rampage. Despite Joneus' best efforts, Skeldon used its reforming powers to outwit the hero and even took a direct hit from the Planium Beam without slowing down. In an attempt to find the monster's weak point, Joneus used the Ultra Stopper to hold Skeldon in place to see if he could locate it as the attack quickly drained his energy. After two more Planium Beams, Skeldon was finally destroyed and Joneus flew off. 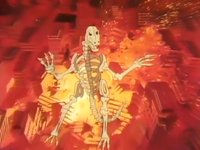