Silvergon was a monster that dwelled within another dimension known as "The Rainbow Underworld," an alternate dimension where he reigned supreme. Upon noticing a family of humans that wandered into his domain, Silvergon gave chase but luckily for them, Silvergon's poor eyesight caused him to overlook his prey and he turned away.

Once GUTS arrived to investigate the Rainbow Underworld, they were attacked by another monster that lived within the dimension, Gagi. Gagi attacked the family trapped inside his barrier dome, but Silvergon soon arrived and attacked Gagi himself, breaking through Gagi's barrier. Silvergon overpowered Gagi with ease, shrugging off nearly all of his attacks and even tearing off one of Gagi's whips until finally, Silvergon killed Gagi by mauling at his throat. Silvergon then turned his attention to GUTS and the family he encountered before and attacked them both.

Daigo transformed into Ultraman Tiga and distracted Silvergon from his attention on GUTS. Silvergon’s strength gave Tiga great difficulty in competing against the powerful monster, both his own physical strength was outmatched and even the Zeperion Beam (while managing to topple Silvergon to the ground) were both shook off by the beast. Tiga then changed to Power Type, but even then Power Type couldn’t even overpower Silvergon's strength and he was tossed around by the monster. Suddenly, GUTS alerted Tiga of Silvergon’s weakness: His poor eyesight. Tiga used this advantage to tease Silvergon who became frustrated, but finally Tiga managed to use the Tiga Head Crusher to piledrive Silvergon into the ground, trapping the behemoth so he couldn't escape. Tiga flew high into the sky and flew back down on Silvergon at incredible speed, performing the Tiga Burning Dash, and rammed straight threw Silvergon, killing him in a huge explosion. The Rainbow Underworld then disappeared into nothingness.

Silvergon was cloned 10 years later by a scientist named Dr. Otomo, along with Shieldron. Clone Silvergon was made as a test item for the scientist's self-made monster: Neosaurus. But first, he was tested against Clone Shieldron, in order to test his power. With his improved eye sight, Silvergon fought ferociously against Shieldron. After thoroughly killing Shieldron, Super GUTS attacked Clone Silvergon and succeeded in making him half blind.

Later, Clone Silvergon returned and confronted Super GUTS for attacking him. However, he was confronted by the newly released Neosaurus. Sure enough, Clone Silvergon's strength was feeble in comparison to the bioweapon was ultimately destroyed by Neosaurus's Helix Beam.

After transforming Ultraman Mebius into a bronze statue, Alien Super Hipporit unleashed King Silvergon and King Goldras to attack Japan. The duo seemed indestructible, even when the air force launched an attack that was futile to their strength, and their rampage continued into the night. Alien Super Hipporit joined them in the rampage until Ultraman Tiga arrived to stop them. Tiga was able to handle both monsters until their master joined in the attack, and Tiga was imprisoned in a cylinder prison. Dyna and Gaia soon joined the battle, again evened the odds for Tiga. Dyna battled King Silvergon by himself, and eventually the monster was destroyed by the Solgent Beam.

King Silvergon reappeared in the movie Mega Monster Battle: Ultra Galaxy Legends The Movie as one of Ultraman Belial's Belial Army. He teamed up with King Goldras, King Guesra, Alien Baltan, Gomess, Magular, Antlar, Zetton, Gudon, Twin Tail, and Arigera to take on Ultraman. When Rei and Gomora enter their Burst Modes thanks to Belial, he and the other survivors stood back to watch Gomora fight the Ultras. King Silvergon was one of Ultraseven's last kill as Ultraman Belial sends both him and King Goldras to kill Ultraseven, but Ultraseven kills them both with the Eye Slugger before dying himself.

As a King Silvergon rampaged on the desert-like Planet Fanegon, the natives of that world were saved by Ultraman Zero who appeared in the nick of time to protect a group of locals. Countering its famous strength with Strong-Corona Mode, Zero performed the Ultra Hurricane on the beast. While it was in the air, Zero changed into Luna-Miracle and used the Full Moon Wave to tame Silvergon and bring it back down in a barrier. No longer a threat Zero allowed it to return to its home dimension.

King Silvergon appeared in the Dark Spark War before being turned into a Spark Doll by Dark Lugiel. In New Ultraman Retsuden episode 15, Thunder Darambia talked about the original Silvergon as his research topic. It is likely that Silvergon returned to space in his original form after Ultraman Ginga defeated Dark Lugiel. 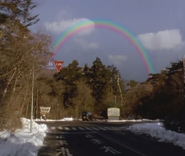 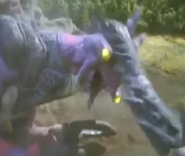 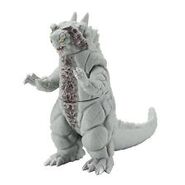 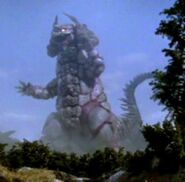 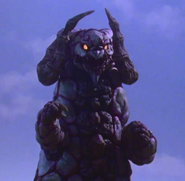 Clone Silvergon getting shot in the eye 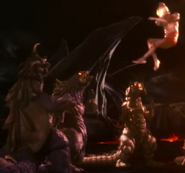 at the front row 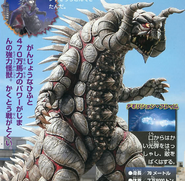 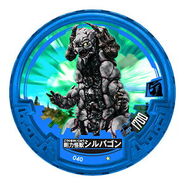