None
Silver Rider (シルバーライダー Shirubāraidā) is a dual-wheeled robot that first appeared in episode 8 of Iron King.

Beginning their assault on the Shiranui headquarters, Goro and Gentaro sought to end their battle once and for all. In response to this invasion, the leader of the Shiranui clan ordered its ninth man to take Silver Rider into Tokyo and destroy the Yamato capital! The machine complied and began to wreak all kinds of havoc. Self-defense forces planes were helpless before the bladed nightmare, however a savior soon arrived! Goro left Gentaro in order to defend the metropolis and transformed into Iron King.

Meanwhile, Gentaro continued his trek to the ninja’s base, forcing the evil organization to recall Silver Rider and every fighting member of their army. The death of Gentaro Shizuka would hopefully be realized that day. The wheeled robot met the human head-on and tried to destroy him, but Gentaro would not be killed so easily. Like a bug on a window, he kept kicking, avoiding all of the titan’s tactics. Lucky for the Special Agent, Goro was nearby and transformed back into Iron King to continue their fight.

Unfortunately, Silver Rider proved too powerful. He met Iron King in a fierce battle but the red giant’s water soon ran out, forcing him to revert back into Goro. Continuing the battle on his own, Gentaro managed to throw a grenade into the villain’s face and destroy the evil titan. With this victory for the heroes, the destruction of the Shiranui clan became visible on the horizon. 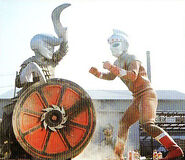