Silver Bloome (シルバーブルーメ Shirubā Burūme) is the first saucer monster and the murderer of MAC Station, that appeared in episode 40 of the TV series, Ultraman Leo.

The vile Black Directive had set his evil eyes on Earth, as so many aliens had before him, including a large number in Ultraman Leo’s time alone. Unlike most aliens, Commander Black did not just command one kaiju. Instead, he commanded a total of eleven monsters housed on his homeworld, known as the Saucer Beasts. Upon arriving on Earth, Black was quick to see the threat MAC would present to him, so he called his first pet, Silver Bloome to Earth, intending to dispose of them. True to their title, the first of Black's monsters took on the form of a flying saucer to come to Earth. MAC soon detected the strange behemoth on radar while in the midst of a party, but before any attack could be launched or defence mounted, the titan ambushed their space station with relentless fury, tearing into it with his tentacles and spewing acid into its hull, intending to consume it whole. However, most of MAC managed to get into a fighter and try to escape, but Silver Bloome wouldn’t have it. The beast quickly grabbed onto the fighter and consumed all on board whole. Realizing with MAC gone, and that he had taught Ultraman Leo everything he could do to help the Earth, Dan vanished into thin air to return to the Land of Light. Before he left, he implored Gen to remain on Earth and defend it in MAC‘s stead. Gen complied and transformed into Leo to survive as the space station was destroyed, latching onto Silver Bloome’s body and trying to fight. He was too late to rescue his friends from the destructive beast as it escaped him in order to continue to Earth, where it transformed into its true form. For the first and only time in history, an Ultra’s support group had been utterly destroyed.

After not only consuming the bulk of MAC’s force but then laying waste to a city, Silver Bloome was engulfed in a cloud of yellow gas and shrunk down to its smaller form. His rampage left hundreds dead, including several dear friends of Gen. Never before had an Ultra lost so much, let alone to one monster. Silver Bloome transformed into a new form, that of a rock, to hide out until his master called him into action once again. A young boy on his way to school picked up Silver Bloome, and when he arrived, the inactive Kaiju was placed in his locker. Deciding to keep prey nearby, the monster followed the boy to his class and was found again on the child's desk. The class looked down at the strange rock, arguing over what it was until the teacher dismissed it as just a normal stone and placed it on his desk, totally unaware of the evil it contained. Later that night, the alien floated into the air, preparing to escape, but was interrupted by the teacher returning to examine it. Still wondering what it was, he struck it with a hammer, but Silver Bloome was unharmed and remained inactive. Confused, the scientist then tried to heat it using a Bunsen Burner, Which made Silver Bloome awaken. Spreading its toxic gas, Silver Bloome paralyzed the man then consumed him alive. Finally, Black decided it was time and summoned the monster back to destroy the city.

Silver Bloome descended on the city, engulfing and destroying a building with its massive strength. Commander Black watched, laughing as the jellyfish-like space monster laid waste to the city. Content with this show of his awesome might, Black commanded Silver Bloome to revert to its smaller form to hide till the time was right. That time came, and Silver Bloome returned to its massive size to begin attacking a nearby school, seeking more prey. Gen arrived to help the students escape as the first of the Flying Saucer Beasts continued to attack, sending acid all over the school. After leaving the school in flames, the kaiju moved on to attack the city itself. Having enough, Gen transformed into Leo, ready to take the creature down and stop its onslaught. He held the monster so the children could be rescued, still, the massive beast was a handful and wrapped him in its tendrils, intending to consume him. However, this would be its undoing as Leo broke free of its tendrils. Leo drove his hands into its mouth and began pulling out whatever his hands latched onto, literally gutting it alive. Disemboweled, Silver Bloome was left vulnerable to a blast of the Ultra's Leo Flash, blowing it to bits and avenging his friends that it had killed.

Silver Bloome reappeared in episode six of the series Ultraman Orb as a Kaiju Card used by Alien Nackle Nagus in a card game between Jugglus Juggler and Alien Metron Tarude. 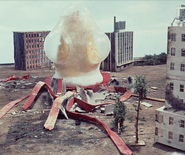 Silver Bloome in his saucer form

Siver Bloome floating in the rain

Silver Bloome about to consume Leo

Silver Bloome exploding after being hit with Leo's Leo Flash 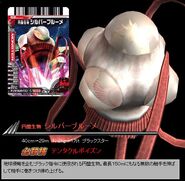 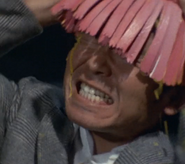 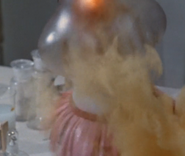 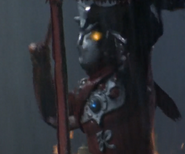 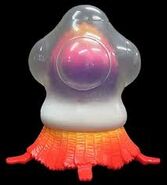 Figure of Silver Bloome, by Yamanaya.

A shaved cocktail at Ultraman Festival designed after Silver Bloome.

Add a photo to this gallery
Retrieved from "https://ultra.fandom.com/wiki/Silver_Bloome?oldid=463003"
Community content is available under CC-BY-SA unless otherwise noted.