Sildron was a insect who mutated into a thick, oil/chemical drinking beast. He was seen doing wreckage to a chemical factory but did not attract the attention of Super GUTS since they were watching a game at a baseball stadium. After they finally got their heads screwed on right, they attacked Sildron using the GUTS Eagle; but could not since Sildron's third eye can sense the bullets and can raise his arms to deflect all shots. Eventually, Ultraman Dyna had to show up and take on the creature, but could not even dent the beast due to his danger predicting eye and his barrier-like arms. Soon, Dyna's Color Timer began to flash. Suddenly; the pitcher on Asuka's old baseball team showed up and taught Dyna how to use the Ultra Fork; an attack where Dyna concentrates his Solgent Beam into a baseball and hurls it. Although the first shot was deflected, Dyna did not give up and threw the second ball under Sildron's arms and hit him in the stomach. After being hit in his weak spot; Sildron fell over and exploded. Winning Shot

Sildron was recreated on an island and purposely used as a test item for Clone Silvergon. The two eventually fought and, although Sildron deflected most of Silvergon's attacks, it was soon knocked down by Silvergon's powerful tail and beaten to death when Silvergon rammed his tail on Sildron's head repeatedly. Battle! Monster Island

Sildron reappeared as a card in this arcade game with the ability: Straight Combat is Powerful (ストレートには滅法強い Sutorēto ni wa meppō tsuyoi). This card is an ability card (yellow), and its ability is that it will let your defense increase for this round, and that your opponent will only guard (meaning that their speed will be lowered sharply).

Both versions of Sildron where only released once by Bandai in their 1998 Ultra Monster Series. Both toys have became rare in recent years and is valued by collectors. Both toys share the same mold and both have the same paintjob patterns as well, with highlights of yellow for Sildron and purple for Clone Sildron on the neck, torso, and thighs. Intricate pattern can also be found on the tail. There are much controversy surrounding the Clone Sildron figure, as Bandai had not bothered to mark the foot of the toy as a clone, just like the Clone Sildron toy. However, the toys are still eye candy and can be tons of fun for anyone, little kids and adults alike. Sildron was tagged as 116 and Clone Sildron was tagged 116-EX. 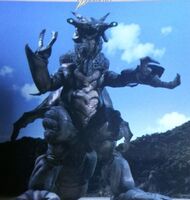 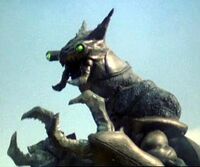 Sildron in a promotional magazine
Add a photo to this gallery
Retrieved from "https://ultra.fandom.com/wiki/Sildron?oldid=527542"
Community content is available under CC-BY-SA unless otherwise noted.