A Terrible-Monster that was owned by Alien Revole that had attacked the Tokyo Signal Cabin. The Terrible-Monster was seen killing the driver. After Revole retreated, he summoned Signalion again. Using its blinding signal flashes, the creature caused havoc by destroying buildings and vehicles, while Seiji Hokuto attempted to fight the monster on foot, before transforming into Ultraman Ace.

Ace begin to assault the Terrible-Monster with punches and kicks. Signalion however began to fight back. The fight quickly became equally matched. However, during the tide of the battle, Signalion used its signal flash to to stun the Ultra. Not wasting the opportunity, Signalion began to shock Ace with its signal beams. Fortunately, Ace overcame the shock effect and shot the Terrible-Monster with his Metalium Beam causing it to evaporate after one last anguish filled cry. Mass Chaos in Tokyo! Traffic Signals Gone Haywire 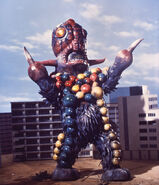 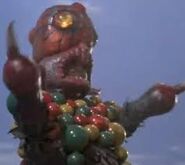 Figure of Signalion, by Marmit. 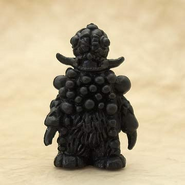 A Signalion eraser
Community content is available under CC-BY-SA unless otherwise noted.
Advertisement