Shunji Igarashi (五十嵐隼士 Igarashi Shunji) is a Japanese YouTuber and former actor. He is known for the his lead role as Mirai Hibino, the human form of Ultraman Mebius, in Ultraman Mebius. He belonged to Watanabe Entertainment for 3 years during junior high school days. He was also a member of the young male actor group D-BOYS of the same office.

In early 2006, Shunji conquered his first lead role as Mirai Hibino/Ultraman Mebius in the tokusatsu series Ultraman Mebius, the 40th anniversary production in the Ultraman Series. He was chosen for the role for being able to convey the part of a "rookie" hero well, being at the time a new actor with little experience in demanding lead roles himself. A fan of the Ultraman series, Shunji has declared that the desire to play the role of Ultraman was one of the reasons he entered the entertainment world, and that being able to work with the same actors who had played his childhood heroes was one of his highest personal accomplishments.[1] Shunji was so fond of his work in the series that he eventually incorporated the Möbius strip sign "∞" to his autograph.

In November 2013, at the last performance of GLORY FIVE 2013 tour at Tokyo Dome City Hall, Shunji Igarashi officially announced that his contract with Watanabe Entertainment agency was ending and he was retiring from the entertainment business by the end of November because of new interest in other work outside the industry. Shunji said "It is interesting also for jobs other than entertainment, I want to study from the beginning, I want to try it". The 27 year old actor made the announcement during the live concert of his musical unit D☆Date.

The live concert on November 17 at the Tokyo Dome City Hall was his final entertainment gig after nine years where Shunji announced it directly to the fans. Lastly, Shunji thanked his fans for their utmost support and encouragement.

Currently, the role of Ultraman Mebius is passed to voice actor Jun Fukuyama. Despite his retirement, Shunji's grunts were still kept and reused in some of Mebius' later appearances.

On May 28, 2021, Shunji took part in a two part collaboration video with former co-star Masaki Nishina, where they talked about various topics. The former elaborated on his reasons from retiring from showbiz. Back then, people only knew him as either Mirai Hibino or as Tetsuro Yufune in ROOKIES. Shunji felt he wasn't "saving" them, and that he was a separate person from his characters. With the thought that his career as an actor won't last long, Shunji started to begin researching on how to do business, specifically how to start and manage a restaurant.

Once he got to the point that everything was decided & planned, he decided to retire from the entertainment business. He currently owns four restaurants and is planning on getting a fifth. Shunji then revealed that he is slowly getting contacted on his Twitter for entertainment Industry related work again, but he mentions that he wishes to take on only projects that he can balance his restaurant business with.[1]

This section refers to Shunji's grunts being reused per stock footage in other Ultraman Series: 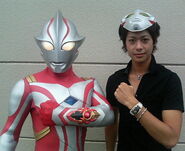 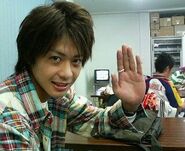 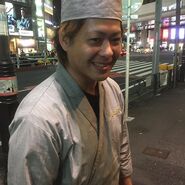 Shunji in the present time